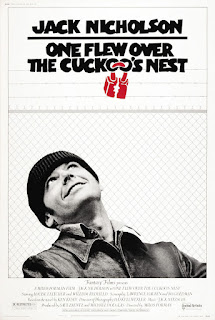 As always, this review may contain spoilers.

R.P. McMurphy (Jack Nicholson) is a criminal, who acts insane to get out of labor duties, then he gets sent to a mental institution. Once here, McMurphy both endures and stands witness to the abuse and degradation of the oppressive Nurse Ratched (Louise Fletcher). He grows a bond for the other patients, and forms a group to rebel against her.

This movie shows how poorly-constructed society's approach to the mentally unstable is and how the character of R.P. McMurphy is portrayed as one fighting for freedom of choice and basic human rights. In addition to Nicholson's great acting, this movie introduces yet another greatly talented actor (his first premiere actually), Danny DeVito as one of the patients.

From a movie from the 70s, I was very impressed with the way this film was directed, the camera work, and the sound was managed. The most humorous scene, to me, was the fishing trip on the ocean. The idea  that the crazies would rather watch McMurphy and his girlfriend rather than fish cracks me up each time I watch this. On the other hand, the most remembered scene would have to be the end when McMurphy returns from electroshock treatments (half vegetable, mind you) and Chief Bromden suffocates him with a pillow as to not end up like his father, who the hospital staff made into a vegetable long before he died. Chief then does the inevitable and throws the fountain into the window, breaking the fence and escapes!

Bottom line, I consider this movie a classic and I believe you should too. Forget trying to rent this movie, buy it if you haven't already.
Posted by: Mike 2 comments:
Tags: 1970s, Comedy, reviews
Newer Posts Older Posts Home
Subscribe to: Posts (Atom)