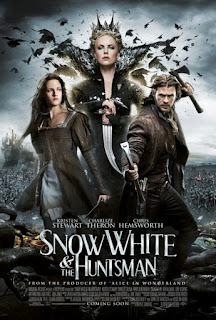 
Warning: Spoilers Ahead! You have been warned.

Kristen Stewart stars Snow White, a royal princess who loses her mother at a young age. When her father realizes she needs a mother, he's tricked into marrying Raveena (Charlize Theron) who poisons him and rids the kingdom of his ruling. Imprisoned Snow White decides to escape just as the Magic Mirror declares her the source of the Evil Queen's immortality. The queen sends her men, led by a local huntsman to bring Snow White back. Meanwhile, Snow White's childhood friend, William (Sam Claflin) learns she is alive and sets off to save her. Upon her capture, the huntsman winds up becoming her protector and mentor in a quest to vanquish the Evil Queen.

Say what you want about the cast, this movie was pulled off pretty well. I skipped this when it hit the theaters, but it was more than worth my $1.50 Redbox rental, and would honestly say it's worth a $5 purchase later on.
Posted by: Mike No comments:
Tags: 2010s, Action, reviews 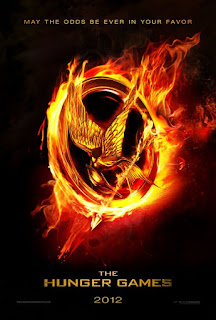 As always, Spoilers ahead! If you haven't seen the movie yet, don't read this review. You have been warned.

Set in the future, where a capitol drafts a boy and a girl to represent their individual districts in a game of survival of the fittest. There are a total of 12 districts altogether, meaning there are 24 chosen participants in this publicly televised event, who are forced to eliminate their competitors. The last boy or girl standing wins. When sixteen year old Katniss' (Jennifer Lawrence) younger sister Primrose (Willow Shields) gets chosen as district 12's female representative, Katniss stands up to volunteer to go in her place. It is obvious both participants are going up against much stronger, experienced participants - some of whom have trained for this event their entire lives.

Having never read a page of the book, and knowing nothing about this movie, I still wanted to go and see what all the Internet hype was about. Originally I had thought this was just another over-dramatic book adaptation flick, similar to one vampire saga I won't mention. Anyways, this movie had me sitting on the edge of my seat the entire second half, comfortably the first half. Movies are meant to work up to the end, and I believe The Hunger Games did just that. Would I recommend this to a friend? Yes, even if you're like me and haven't read a single page of the book it's based on. The action sequences are unbelievably great for the average movie goer, and for anyone into drama this movie will pull you in for sure. I had thought the ending could have been cut in half, but after thinking about it I liked how it had a Shakespearean (Romeo & Juliet) twist to it (two winners [boy and girl from a single district] or none).
Posted by: Mike No comments:
Tags: 2010s, Action, reviews


Synopsis:
Nick Fury of S.H.I.E.L.D. brings together a team of super humans to form The Avengers to help save the Earth from Loki and his army.

My Thoughts:
This is a movie I've been meaning to give my thoughts on since seeing it when it premiered in theaters back in May. I usually don't watch many superheroes outside of Batman, so I went into this knowing very little but it truly exceeded my expectations. Both Iron Man movies, Thor and Captain America: The First Avenger were titles I saw once, but brushed them off as movies worth seeing once but never again. The Avengers, on the other hand, is a title that includes action and even comical moments from all the Marvel characters (Iron Man, Hulk, Captain America, Thor, Black Widow, and Hawkeye) so you just know how great it's going to be even without seeing it, though looking at the box office gross, I'm sure not many people haven't. It's the only title I was willing to pay full price (well, actually far from the MSRP) for when it was released to Blu-ray. As someone who rarely pays more than $5 for a single title, this should be enough to tell how much I enjoyed and recommend it. If that's not enough, perhaps this is enough evidence: IMDb User Rating (as of 10/1): 8.5/10 from 366,234 users
Posted by: Mike 1 comment:
Tags: 2010s, Action, reviews
Newer Posts Older Posts Home
Subscribe to: Posts (Atom)