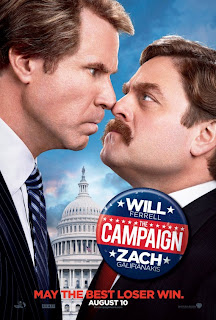 Synopsis:
To gain influence over a North Carolina district, two CEOs seize an opportunity to beat long time congressman Cam Brady by funding a rival candidate, Marty Huggins who has no former political experience. It's nothing but a roller coaster ride the whole way to the state senator's office.


My Review:
This is political spoof, and I wouldn't want either one of these clowns running for office. As a fan of Jay Roach's work such as Meet the Parents and the Austin Powers movies, I found this movie to be his first raunchy, 'adult' comedy. I actually found this enjoyable, as it was good for a few laughs. But don't consider comparing it to classic comedies like The Hangover because it's a whole different view.

Zach Galifianakis and Will Ferrell are exactly what you'd expect. Ferrell brought his extremely immature comical behavior over from Step Brothers, which has given him a trademark of sorts. Galifianakis brought his creepy behavior that you can't help but to laugh at.

Overall, this is more than worth a Redbox buck-fifty rental or if you're not keen to renting, I imagine it'll be in the $5 bargain bins by the end of the year. Definitely check it out for yourself, especially if your a fan of Ferrell or Galifianakis.
Posted by: Mike No comments:
Tags: 2010s, Comedy, reviews
Newer Posts Older Posts Home
Subscribe to: Posts (Atom)