Synopsis:
When an aging drunk, Woody (Bruce Dern) receives a sweepstakes letter in the mail claiming he's won one million dollars, instead of sending a response via the mail he decides to set off on foot to collect the money. The problem, he's in Montana and has to get to Lincoln, Nebraska. Woody's son, David (Will Forte) reluctantly offers to drive him, although he's fully aware the letter doesn't state that his father has truly won a million dollars.Along the way, they decide to stop in Woody's hometown for a visit.


Review:
In my honest opinion, it's movies like this one that deserves an Oscar.

A pet peeve I had while viewing this was the fact that it's only available in black and white. Last I checked, this movie was made in 2013, is there any reason for a movie to not be shot in color? Upon finishing the movie, I realized this was just that: a pet peeve. I immediately understood why the director left it in black and white. It's not the quality picture that was meant to stand out in this movie, it was the story and the characters and what it all stood for!

Movies like this are a dime a dozen though, it seems like every year there's a movie based on a father-son relationship. Some even including long distance travels together, like Nebraska.

Regardless of the repetitive story, the acting and direction of this film earned an academy award, and for that I recommend you all watch it at least once...maybe come back and post your thoughts in the comments below?

Synopsis:
It's 2005, in Louisiana and because of hurricane Katrina, there is a state of emergency. Power lost, flooding, high winds, hospitals evacuating... The loss of Nolan's (Paul Walker) wife during the birth of their daughter left him feeling hopeless, not knowing what to do with a baby on life support. Regardless, Nolan will do whatever necessary to keep his newborn daughter alive.


Review
Supposedly this movie was based on a true story, and I don't doubt it one bit. To be honest, this movie flew by my radar last month, with it's limited theatrical release. When I saw it at Redbox, the only thing that struck out as a movie to check out was the fact that it stars the late Paul Walker. Without him, I probably wouldn't have given it a second look.

Walker played Nolan Hayes, a man who lived a normal life with a gorgeous wife. When his wife, Abigail (Genesis Rodriguez) dies from complications during the birth of their daughter and finds out his daughter needs to be on life support for an undeclared amount of time, he finds himself hopeless. I mean, he has no clue about raising a child, not to mention a sick baby.  And when hurricane Katrina strikes down, knocks the power out and the hospital is forced to evacuate there's no way to transport a baby stuck in an incubator, so Nolan is forced to stay to wait for her to wake up. How soon will that be, well that was undetermined, but could be as soon as two days. With limited power, a backup battery that only stays charged for 3 minutes at a time, the next 48 hours are going to be rough. If that wasn't enough, FEMA and other rescue organizations refused to help residents left behind because they become self-centered, if they don't get rescued first.

Although I really did like this movie,  I found it to be a little unbelievable. For instance, the hospital should have had a emergency plan for natural disasters. Hurricanes aren't something new for the southern gulf states, it seemed like no one was prepared. Other possible flaws in this movie, was how Nolan managed to run from the second floor of the hospital to the roof in less than 3 minutes all while being weak from malnutrition. Another instance would be towards the end, when just magically at the 48 hour mark when emergency crews come in to rescue them, the baby starts crying! I love a happy ending just like the next person, but just because the doctor predicted the baby waking up in 48 hours doesn't mean it's guaranteed to happen.

Regardless of the rushed ending and the time flaws, this was a fantastic story and one that is more than worth the buck fifty rental, if only for Paul Walker's role alone. 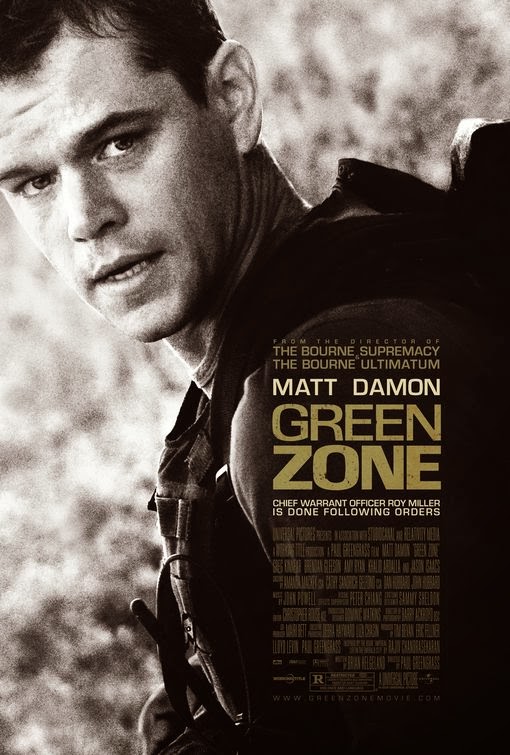 Synopsis:
Matt Damon stars as Chief Warrant Officer Roy Miller of the U.S. Army. Following the American invasion of Iraq in 2003, Miller and his team must hunt down the alleged weapons of mass destruction. Until veteran CIA operative Martin Brown (Brendan Gleeson) tells Miller there are no weapons, that it was a deception to take over the country. So now it's up to Miller to hunt for the truth, and that's just what he plans to do.

Review:
I'm going to try to keep this review free of political debate. I think by 2014, it's quite obvious that the invasion of Iraq wasn't what the general public had in mind. We were all duped by our leader in Washington into thinking  we were getting rid of a national security threat, following the unfortunate events that happened on September 11, 2001.

Director Paul Greengrass and star Matt Damon, best known from working together on the "The Bourne Supremacy" and "The Bourne Ultimatum" movies. Like the Bourne movies, I feel "Green Zone" didn't disappoint. The story wasn't as excruciating as "The Hurt Locker" from the previous year, but on it's own it didn't need upbeat action to hold up the story. This movie had something many like it doesn't have, a well-written, a political conspiracy thriller that has many points that many viewers would question themselves, such as 'why did we invade Iraq back in 2003?' although we had very little proof to back up whether Saddam Hussein was harboring weapons of mass destruction.

Now for the bottom line, if you're looking for a overdone action flick to watch on a Saturday night with a bowl of popcorn, find a different movie. If you're a conservative looking for a movie with a a superb narrated political thriller with a bit of a serious touch, this movie will be for you.