And the Worst Movie Award Goes to... 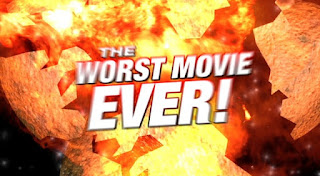 Many of us watched the Academy Awards last weekend, and in light of the big update to this site I decided I wanted to kick it off with something special. As you may know I have seen hundreds if not thousands of movies, so it should come to no surprise that I've seen some really bad movies. I'm not talking about movies that are so bad, that they're good. Those I consider guilty pleasures which I'll save for another time. I'm referring to something that I actually suffered through, something I actually had to ask myself; "Can I have that hour and a half of my life back?" I'm sure we've all been there at one point or another, maybe more than once even.
Sadly this has happened to me on more than one occasion. Even sadder, I can guarantee I still own those movies in question. Anyway, I could easily point out a Tyler Perry flick or a direct-to-video release starring Nicholas Cage but considering we all know going into such a movie that it's going to bad, I won't say they deserve the worst movie award. The movie, I think deserves this award just happens to be one I watched in theaters when it was first released, nearly falling asleep multiple times, and yet still bought it on DVD during a video store closeout sale a few years back..... 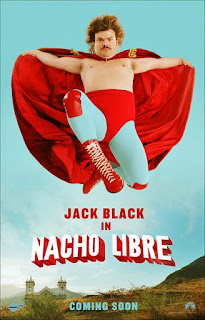 Nacho Libre (2006)
Director: Jared Hess
Starring: Jack Black, Ana de la Reguera, Héctor Jiménez
Running Time: 92 minutes
Synopsis:
Jack Black is Ignacio, a monastery cook who feeds orphan children by day and by night transforms himself into Nacho Libre, a notorious Luchador in stretchy pants. Spurred on by Esqueleto "The Skeleton," a street peasant turned sidekick, Nacho challenges Mexico's most fearsome wrestlers as he fights to save the children and win the affections of Sister Encarnacion, his inspiration and forbidden love.
Review:
When a movie starts off funny, it doesn't take long before it becomes tedious. You can actually see some similarities in this and Hess' other comedy, Napoleon Dynamite. Both films are about outsiders, and both main characters have bizarre best friends. Difference is, Nacho is a lovable character while the main character in Napoleon Dynamite was an unpleasant individual. It's obvious by the script that we were supposed to like Nacho, but Jack Black's performance came off more irritating than endearing.

Nacho grew up in a monastery, and is now the cook.  He has a secret love, wrestling, which he can't admit because monks think it's the work of the devil. Even the newly arrived nun, Sister Encarnacion agrees wrestling is bad. This concerns Nacho, but it doesn't stop him from secretly starting a career of it behind a mask, alongside his skinny, also amateur sidekick Esqueleto (Hector Jimenez). Despite never winning, Nacho gains some popularity and eventually earns the chance to fight the king of wrestling, Ramses (Cesar Gonzalez) in an exhibition match.

Quite frankly, this movie will only interest those who are fans of Jack Black. It's only around ninety minutes long, but to me it felt much longer. The film dragged on, I may have laughed once or twice but not nearly enough to be able to rate this higher than a 2/10. Yeah, it was that bad.


So there you have it, one of the WORST movies I have ever seen. Whats the worst movie you've seen?
Posted by: Mike 4 comments:
Tags: 2000s, Comedy, reviews
Newer Posts Older Posts Home
Subscribe to: Posts (Atom)