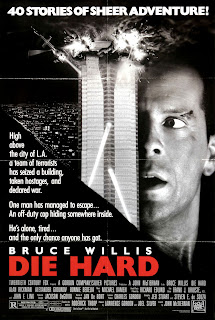 
It's Christmas and when New York City Officer John McClane lands at a Los Angeles airport the only thing on his mind is spending the holiday with his family. When he arrives at his wife's office, everything appears to be normal-well as normal as a crazy office party could be-and after having a small disagreement with her husband, Holly is asked to make a big speech to her fellow employees, leaving John behind.

Unfortunately, it's not going to be a merry Christmas just yet as a group of terrorists led by Hans Gruber overtakes the Nakatomi Plaza building, holding everyone hostage in the meantime. With no way in or out and 12 terrorists with itchy trigger fingers, John is forced to stop them all with only one outsider (Reginald VelJohnson) believing in him.

Thirty floors up and a ton of action, this movie is definitely the start of something good. Watch it, I guarantee you'll enjoy it!
Posted by: Mike
Tags: 1980s, Action, reviews