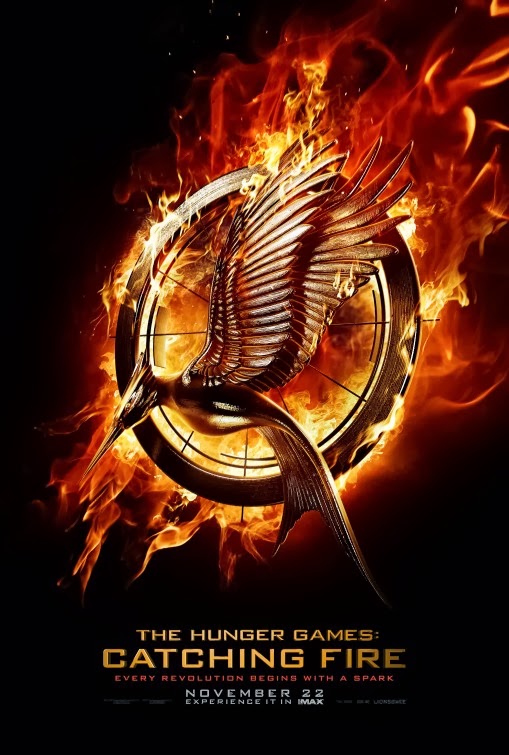 Synopsis:
Following the 74th annual Hunger Games, the current victors Katniss Everdeen (Jennifer Lawrence) and Peeta Mellark (Josh Hutcherson) are catching fire from all the fame. President Snow (Donald Sutherland) is getting less control over the districts, and needs to act fast to make everyone fear him, before they rebel. To do this, he must kill their leader of the rebellion and so he decides to create a "quarterly" Hunger Games amongst past victors, including some of the toughest and ruthless competitors Katniss and Peeta have ever seen.

Review:
I'll begin with saying I really enjoyed the first Hunger Games, although I hadn't read the book it was based on-nor did I even know there was one at the time. It was no surprise that I wanted to see the sequel: Catching Fire. My original thought was to wait for the Blu-ray to be released but when I saw it advertised on the marquee of a small, second-run theatre nearby I decided the best way to see what may have been one of the best movies of 2013 is on the big screen.

Soon after the opening scenes, we see an appearance by president Snow who blatantly threatens to have Katniss and anyone close to her killed, if, she doesn't somehow prove to him that she and Peeta are truly in love. As the 74th hunger games victors are on tour to gain support of the games, we see Katniss experience a form of post-traumatic stress disorder. President Snow, quickly losing the intimidation he has accustomed to, then introduces a twist in the Hunger Games by choosing a past victor to represent each district for a quarter battle.This angers everyone who had ever won the Hunger Games, as they were promised freedom after they won the games. Katniss Everdeen is now leading the rebellion against the peacekeepers.

Overall this movie kept my entertained for the entire run time, and I anxiously await the next sequel as this ended on a cliffhanger. Will I buy it on Blu-ray upon release? Most likely not on release week, but when the price drops to below $10 I will definitely pick it up.