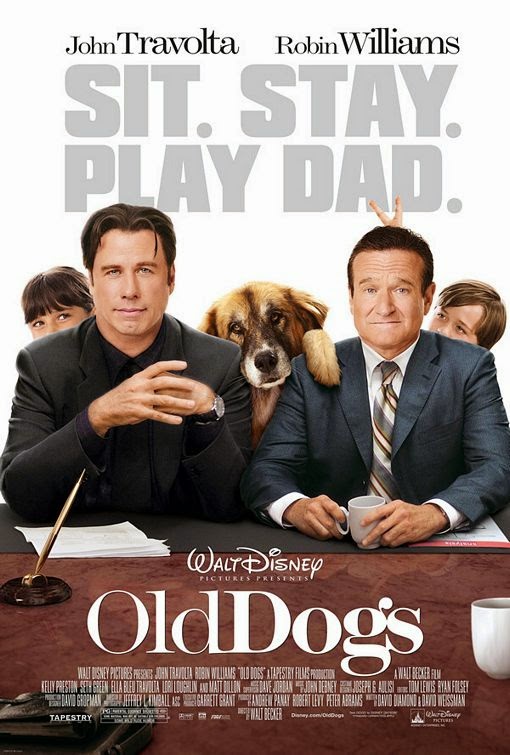 Charlie (John Travolta) and Dan (Robin Williams) are business partners and close friends. Their lives are turned upside down when Dan receives a letter from his ex-wife (annulled marriage) letting him know he is the father of seven-year old fraternal twins. Although he generally hates kids and is clueless on how to raise them, he volunteers to care for them while she is away, at the same time as a their business is at the verge of a huge deal with a Japanese company. With Charlie's help is there any way they can be dad and uncle, meet the kids' expectations, and still land the business deal?


This movie didn't feature Robin Williams as his most comical self, it almost seemed like this was a movie he didn't want any part of and only involved for the paycheck. Sure his quality of work had been slacking in recent years, see Night at the Museum a movie where he plays a museum statue of Theodore Roosevelt, but he still manages to make me smile whenever I watch him. John Travolta in Old Dogs was similar to anything else he's been in, he seems to love being the center of attention and the more he ages the more he wants to see his name in print. Anyone notice that? Anyway I'm rambling on, the plot of this movie was to show how close these two old friends are. When one is in trouble, the other has his back always. When Dan has to take care of his kids, Charlie offers a hand. Reluctantly Charlie also has to open his one-of-a-kind bachelor pad to the three of them.

This movie receives some slack on big movie critic websites, but let's face it, what really makes a good movie? In my humble opinion if a comedy makes you laugh, if a suspenseful thriller keeps you on the edge of your seat, or if a drama makes you tear up... then they are good movies. Old Dogs is a comedy that did it's job, it made me chuckle from time to time. I guarantee as with many movies, there are faults.

Luis Guzman, why is this guy still starring in movies? He has no acting talent, he stumbles in everything he has ever worked on. If anyone can be worse than him, it's got to be Dax Shepard, Gary-the-Child-Proofer(also played Vince on Employee of the Month). Even a new parent would know you don't have to childproof everything in the house for 7-year-olds, but I regress. At least we see some worthy faces; such as Bernie Mac, Ann Margaret, Matt Dillon, and Lori Loughlin.

Consensus: I stand behind this movie, regardless of how many times it's slammed by movie critics across the board. It's a leave-your-brain at the door, sit back, and relax type of movie all the way through. It's less than 90 minutes in length, watch it yourself instead of letting the critics think for you.