A Portrait of Life and Art 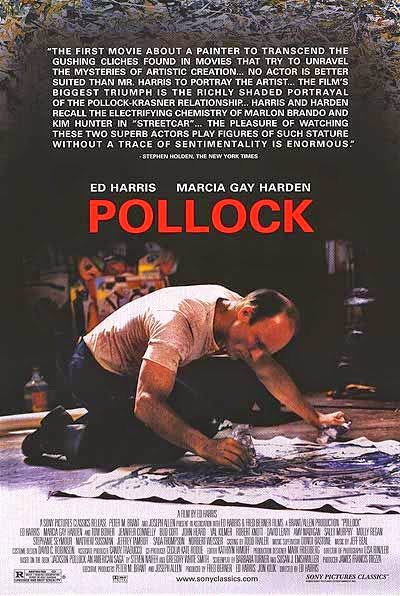 Who is Jackson Pollock and why is he famous?

Ed Harris plays the famed artist, Jackson Pollock in this documentary-drama. Pollock was an abstract painter at the end of the 1940s, starting out a war-exempt drunken citizen living in his brother's tiny apartment in New York. When his brother takes a job out of town, Jackson finds himself needing to support himself as an artist. When he meets fellow artist Lee Krasner (Marcia Gay Harden), who puts her career on hold to be his companion, lover, wife, and caretaker. To get away from the temptations of booze, insecurity, and the stress of city life they move out to the country. His career takes off, critics praise his work, and he gets famous...


Famous for what though is the question, some paint splatter on a canvas and a few empty bottles of liquor. I'm by far not an artist, I cannot draw to save my life but even an infant could make the abstracts Pollock created. We are all artists in our own way, whether it's writing stories or reviews, painting a picture, directing a film, or sculpting a sand castle on the beach..

To make a true story, especially one that means a lot to you as Ed Harris stated is a tough task. I'm not going to say he had complete success because frankly I don't know anything about Jackson Pollock outside of what was portrayed in this film. Interesting enough, Ed Harris' canvas here was huge, although he kept it contained within two hours I have a feeling it could've gone much longer. The moral of the story is how to work and live as an artist. It's a challenge for many today as well. Although he battled alcoholism, I firmly believe Jackson's major battle was that of pleasing the art critics. His artwork must meet a required criteria if they wanted to eat, and they had to eat thus he relied on critics to write positive articles on his work which was tougher to accomplish.

Ed Harris, in my humble opinion, gave the best performance of his career in this film and was well deserving of an an Oscar for Best Actor. He portrayed the perfect level of emotions of the high and low points of Jackson Pollock's life. Marcia Gay Harden won an Oscar for Best Supporting Actress, but considering the amount of time she spent on this film portraying Lee Krasner, it came to a surprise that she wasn't nominated for the Best Actress award that she was distinctively qualified for.