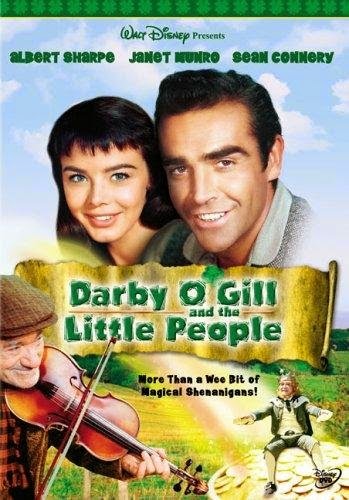 The Movie:
A frisky old storyteller named Darby O'Gill is desperately seeking the proverbial pot of gold. There's just one tiny thing standing in his way: a 21-inch leprechaun named King Brian. In order to get the gold, Darby must match his wits against the shrewd little trickster - which proves no small task, indeed!

Review:
Happy St Patrick's Day, ye followers! If you know me, or think you do, it should come to no surprise that I just love Disney movies and "Darby O'Gill" is no exception. This movie was one of the first DVDs I ever added to my collection, I've probably seen it every other year around this time since. It never gets old, and proves to me every time I watch it that Disney actually made some quality non-animated movies back in the day.

This movie stars the young pre-Bond Sean Connery, as Michael MacBride who comes to replace Albert Sharpe's Darby O'Gill in a poor village of Ireland when he almost instantly falls in love with Darby's daughter Katie, the beautiful Janet Munro. The only problem is, she subtly finds out Michael is there to evict her and her father from the only place they've called home. It's up to Michael to prove to Katie that his intentions are honorable, and that he really does love her, but not before standing up to the village drunk-stronghold Pony Sugrue (Kieron Moore).

The little people as they are undoubtedly referred to in this film are considered make believe, only seen by those who had a bit too much to drink. As a matter of fact, when Darby tricks King Brian into staying, the only person who could actually see him was Darby himself. He is granted three wishes, to which he decides to think hard about as to not be tricked into losing them again.

The scenery is beautiful, the actors skillful and wholeheartedly into their work, and the music is catchy and delightful. Don't be put off by the date this was made, this movie is definitely not one you'll want to miss.