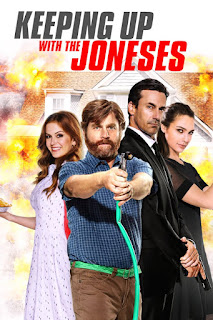 Ah, the American suburbia, where your social status means everything and your status improves by the amount of money you have or the material goods you buy. Back in the day, neighborhoods like the one in the movie were close-knit communities, today it seems like the most you'll get out of your neighbor is a friendly nod.

The Gaffneys had a good life. Jeff (Zach Galifianakis) works as an human resources director at a big defense plant. He's an average guy who hasn't met a problem that couldn't be solved with a stress ball. His wife, Karen (Isla Fisher) is an interior decorator who took some time off to raise their kids. On the surface everything appears to be normal, however it feels like something is missing in their lives, especially now that they're kids are away for the summer.

That is, until the Joneses' family moves in across the street. Natalie (Gal Gadot) is super sexy, who excels at everything she does and Tim (Jon Hamm) is an handsome, accomplished travel writer. Tim and Jeff hit it off immediately, while Karen is a bit hesitant to connect with the ever-so-suspicious Natalie. As it turns out, the Joneses' moved in next door for a purpose, they are spies and have their eyes set on Jeff's place of employment. It involves a mole within the company, a vicious arms dealer who is only known as "Scorpion."

Let's face it, espionage movies involving ordinary people have been done many times over the years. Similarities include, but are not limited to, Spy, True Lies, Mr and Mrs Smith, among others. Keeping up with the Joneses isn't any different, actually truthfully it may be one of the worst of the aforementioned titles.

RATING: 2/5  A movie to watch if you're really, really bored and have a buck-fifty burning a hole in your pocket but don't expect anything close to a masterpiece.