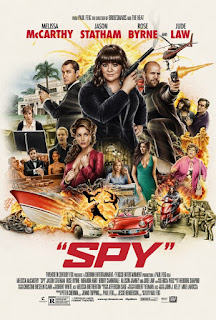 Synopsis:
Susan Cooper, played by the witty Melissa McCarthy has always been told she didn't have what it takes to be a field agent, but when her partner is allegedly killed by a deadly arms dealer and another top agent is compromised, she volunteers to go deep undercover to prevent a global crisis.

Reviewing movies still in theaters is so cliche that I rarely do it, actually I rarely watch movies in the theater period. However over the weekend I had the opportunity to see a double bill of Jurassic World and Spy, two of the year's current top movies at the box office.

As a long time fan of Melissa McCarthy, well before she started appearing in movies, I was looking forward to seeing Spy sooner or later. Reuniting McCarthy with Rose Byrne on the big screen, since Bridesmaids was such a treat. The plot brings us a James Bond type film, with the novelty factor of interesting characters of it's own - creating a one of a kind spy adventure with some seriousness one would find in a Bond film.

Spy is an action comedy, whether you view it as a action or a comedy is up to you. Personally I found it hilarious from the first minute it flashed on the screen to the very end of the credits. If you're not laughing at the jokes, you're laughing at the over-the-top action sequences.

The characters each have their own way of being likable, not just Melissa McCarthy, Jude Law, or Statham but also the supporting cast. For instance, Miranda Hart plays Susan Cooper's goofy friend and colleague who does some dumb things with the right intentions, Rose Byrne plays the daughter of a deadly arms dealer and exchanges some hilarious one liners with Cooper throughout the film, and Peter Serafinowicz who plays Aldo, the sleazy Frenchman who loves women and everything about them. The leading cast includes Melissa McCarthy is one of her funniest roles since The Heat. Her witty humor and snarky personality makes her a perfect undercover CIA agent. Next brings us Jude Law, this man could very well become the next James Bond, as scary as that may sound. Finally, our last lead actor is a recent action hero who requires no introduction, Jason Statham. Personally I believe he was trying too hard to steal the show in this movie, his jokes was uncanny and even the action sequences he was involved with seemed a bit washed up. That's not to say he's a bad actor, he just should stand clear of comedic roles of which he does not belong.

Spy was everything I expected plus some, directed by Paul Feig proves he clearly knows how to join the right amount of comedy and action to make a blockbuster worth watching. It's not Oscar-worthy, but I believe it was only aimed to be a campy fun Bond-esque flick, nothing more or less. A movie I would recommend if you are looking for a fun movie night.