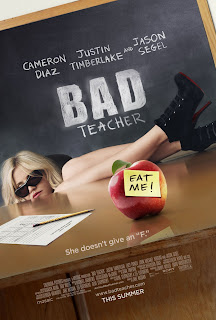 MPAA Rating: Rated R for sexual content, nudity, language and some drug use
My Rating: 3/5

A poor Chicago teacher, Elizabeth Halsey (Cameron Diaz) plans to quit teaching to marry her wealthy fiance, but when he dumps her, she tries to win over substitute teacher Scott Delacorte (Justin Timberlake). Their colleague Amy Squirrel (Lucy Punch) is also pursuing Scott, while the school's gym teacher Russell Gettis (Jason Segel) who is always trying to ask Elizabeth out.


When she thinks breast implants will help her get closer to a wealthy man, and learns that she can't afford the operation, she scams the 7th grade class car wash and the parents for some fast cash...However, the profits weren't even close to how much she needed for the operation.

She later learns of a bonus for the teacher who has the class with the highest state scores. Halsey decides to change her style of teaching, going from a teacher who only showed movies to one who makes her students study vigorously for the approaching exam. The change in her teaching style and her efforts to prepare her students was not enough, seeing how they were scoring low on the quizzes she gave them. All the while she begins a friendship with Gettis, the gym teacher, and Squirrel and Delacorte begin dating.

Halsey then decides to steal the state exam that her students were going to be taking by passing for a journalist who wanted to do a report on the racial bias of the exam. When the man in charge of the exams, who she is interviewing, explains he can not give her the exam due to protocol, she resorts to seducing and drugging him in his office and stealing it from his office herself. She also takes nude pictures of him as insurance in case she gets caught. A month later Halsey wins the bonus and pays for the appointment to get her breasts enlarged.

In the end, Squirrel gets transferred to a school where the students have behavioral problems. Halsey ends up realizing she doesn't need the breast implants and takes a guidance counselor job at the school while dating the gym teacher.

Overall, just because this movie got such a low rating on IMDb, doesn't mean you shouldn't go see the movie for yourself...
Posted by: Mike
Tags: 2010s, Comedy, reviews