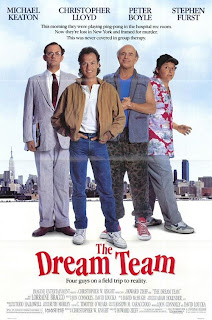 Dr. Weitzman (Dennis Boutsikaris) works with four patients with different issues. Billy (Michael Keaton) is a pathological liar, Henry (Christopher Lloyd) believes he is a doctor with an obsessive compulsive disorder, Jack (Peter Boyle) is an ex-ad executive who believes Jesus is talking to him, and Albert (Stephen Furs) is an adult who never talks and occasionally wets himself.

When the doctor is convinced the patients need some time away from the sanitarium, he plans a trip to see a Yankee baseball game. Along the way, Dr. Weitzman witnesses the murder of a police officer and is attacked and hospitalized. This leaves the four disturbed patients alone on the streets of New York. The four crazies find that Dr. Weitzman will be murdered as a witness and no one believes four mental patients. They now have to diverge a plan to rescue Dr Weitzman from the hospital with the police and killers chasing them.

Overall, this is one movie I would actually watch more than once and laugh more than the last time. It's got a perfect cast list and a better-than-most plot line. Would I recommend it? Sure, why not!
Posted by: Mike
Tags: 1980s, Comedy, reviews