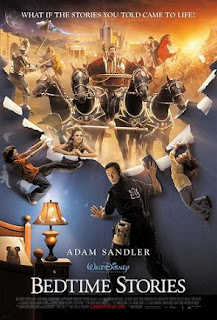 Skeeter Bronson (Adam Sandler) is a hotel leader who is promised as a child by his father Marty (Jonathan Pryce) to be the manager of the family hotel, but later it is bought by chain Nottingham Hotels. 25 years later, the new manager Mr. Nottingham (Richard Griffiths) plans to build a new hotel and appoints another man, the snotty Kendall (Guy Pearce) to become the manager, because he is dating his daughter.

When his neice and nephew’s school is threatened to be closed down, Skeeter is asked by his sister (Courtney Cox) to watch her kids while she travels to Arizona to look for a new job. Skeeter tells a bedtime story taking place in medieval times, assisted by the kids, the first night. The next day, he is chosen to come up with plans for a new hotel, which gives him a shot at being the new hotel manager, after Mr. Nottingham finds out Kendall’s plans were the same as the Hard Rock Hotel. On his way home, it rains gumballs, all from the story.

The next night, Skeeter tells a story taken place in the Old West, and when he waits for it to come true, a man (Rob Schneider) steals his wallet. He saves Mr. Nottingham’s daughter, Violet (Teresa Palmer), from the paparazzi and gets kicked by a dwarf (Mikey Post). The next night, on the rooftop, having a campfire - Skeeter falls in love with his sister’s friend Jill (Keri Russell).

On the last night, Skeeter has the kids make up plans for the new hotel. The only problem is, Skeeter told the kids that there’s no such thing as an happy ending. The last night, he tells them about a space fight, and unfortunately makes the discovery, after he wins the gig of manager, that the closing school is where the new Nottingham Hotel will be. After being fired, which turned out to be the connection with the ending of the space story, he gets the hotel moved to Santa Monica and then stops the demolition, saving the school and his neice and nephew, as well as getting his wallet back.

Later, he marries Jill and opens his own hotel named after his late father.
A HAPPY MADISON PRODUCTION!
Posted by: Mike
Tags: 2000s, Comedy, reviews