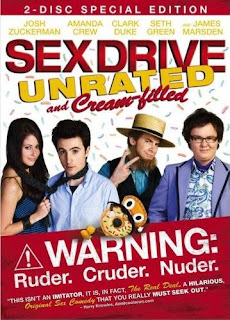 Eighteen year old Ian Lafferty (Josh Zuckerman) sets out on a cross country drive with his best friends Lance (Clark Duke) and Felicia (Amanda Crew) in order to lose his virginity to a sexy, hot babe he met on the Internet. But the journey, filled with hilarious misadventures which can be expected, teaches all three more than they expected about life and love.

Ian can't seem to catch a break, while taunted by his older brother Rex (James Marsden), shown up in the romance department by his 14 year old brother and humiliated by his job at a donut shop at the mall. Being 18 years old, and still a virgin complicates everything for him, while it pushes him to look for romance on the Internet, he hooks up with Ms. Tasty, who is a sexy hot blonde who can't wait to get intimate. Of course, there's a catch: Ian has to drive 500 miles from Chicago, IL to Knoxville, TN. Nagged by his buddy Lance, Ian risks everything and "borrows" The Judge, Rex's prized vintage Pontiac GTO. Along the way, he runs into car trouble, some jail time, a buggy tow with an Amish farmer (Seth Green), a evening at an Amish 'party' and an afternoon at a roadside carnival to complicate Ian's journey. As they continue on their journey, there are a few consequences that Ian has to realize, for instance: Will Rex find Ian before he reaches Knoxville? Will a anger-crazed husband get revenge on Lance just as he seems to have found true love? Will Ms. Tasty live up to her Internet profile? Will Ian realize what he really wants? And most importantly, will Ian, Felicia and Lance survive the bumpy road to adulthood with all its unexpected twists and turns? This hilarious movie will keep you laughing throughout the movie, but I can't figure out whether or not it's worth buying just yet - definitely worth a rent.
Posted by: Mike
Tags: 2000s, Comedy, reviews