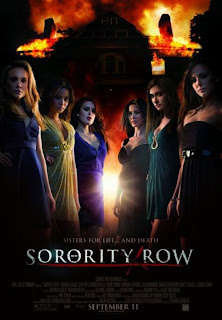 "Sorority Row" directed by Stewart Hendler, is about a group of sorority sisters who try to cover up the death of their house-sister after a prank gone wrong, only to be stalked by a serial killer. Originally, they try tricking a guy into thinking he killed his girlfriend, then take him into the middle of nowhere to 'dismember" the body, only to reveal the prank. However, the prank goes horribly wrong, and they're forced to drop the girl down an old mine shaft while keeping quiet to save their futures. A year later, at a welcoming party for the new sisterhood, they end up being haunted by those events.

How far can a group of sorority sisters go before mentioning the death of their house-sister?