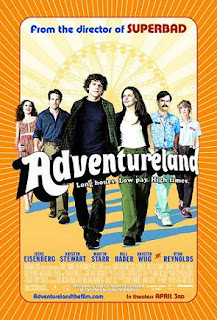 In the summer of 1987, James Brennan (Jesse Eisenberg) just graduated from Oberlin College. He is looking forward to touring Europe with his friend and going to Columbia University the following year, when his parents (Wendie Malick and Jack Gilpin) break the news that they won't be able to help him financially.

Of course, this means James will have to cancel his plans and find a summer job. Come to find out, he doesn't qualify for anything but a job at a local amusement park, Adventureland. He thinks he's applying to operate the rides, when the manager, Bobby (Bill Hader), immediately assigns him to the games area. His first day is spent meeting some of his co-workers: Joel (Martin Starr), Bobby's wife Paulette (Kristen Wiig), Sue O'Malley (Paige Howard), Mark (Mark Miller), Lisa P. (Margarita Levieva), and the park's repairs technician Mike Connell (Ryan Reynolds), who is a part-time musician and claims to have once jammed with Lou Reed.

He also meets Emily "Em" Lewin (Kristen Stewart), fellow games area co-worker, when she rescues him from almost being knifed by a dishonest customer. When they go for a drink at a local bar, he freely admits he's a virgin and starts talking about his ex-girlfriends from school, a very big mistake according to Connell. When James tells Connell, that he thinks he loves Em, the first thing Connell does is tells her. She does what she thinks is right, by telling James she just wants to take things slow - one step at a time.

The next day, Lisa P. asks James out. After James returns home after the date, he finds out Em tried calling him, so to make it up to her, he gives her some of his marijuana to bake some 'pot cookies'. After a pot-induced game-playing streak, Joel is attacked by an angry customer who learns the games are rigged. When Em steps in, the customer pushes her and James defends her by punching him.

Later on, Joel sees James and Em walking together and quits. When James confronts Joel, trying to encourage him to go back to work, he gets angry because James went out with Lisa P. when he clearly has Em.  That night, Em goes to Connell's to end their affair when James finds out and confronts her about it. James tells Lisa P. about the affair between Em and Connell and she tells one of her friends, and now everybody in the park knows about it. This causes Em to quit, and go back to school (NYU).

James realizes he and Em are perfect for each other, and wants her back at whatever cost, so he decides to go to New York even though he has no money for school. Waiting for her, outside her apartment in the rain, surprises Em when she arrives. Once there, James gets out of his wet clothes, and finds she still has an Adventureland shirt.

I have to admit, this was one of those movies where it was a no-brainer on how it was going to end, but was very good in my opinion and I have seen LOTS of movies.