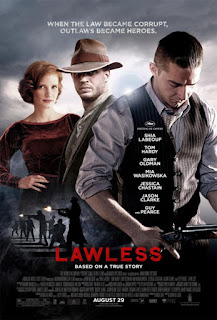 Synopsis:
(Provided by IMDb.com)
Set in Depression-era Franklin County, Virginia, a bootlegging gang is threatened by a new deputy and other authorities who want a cut of their profits.


My Review: (Spoilers ahead: You have been warned!)

Based on a novel by Matt Bondurant, Shia LaBeouf and Tom Hardy are Jack and Forrest Bondurant, two brothers who continue to run moonshine in the backwoods of Virginia, during the Prohibition-era, after losing their parents to a plagued disease. It's a classic story of survival of the fittest when a new deputy insist on making a cut of their profits, eliminating anyone who rebels.

It seems unbelievable at times, but overall this movie was a decent reenactment of "the good 'ol days" when making and selling whiskey was illegal. For example, Forrest was one that seemed to have nine lives; as he missed a near death with the same disease that took his parents, survived having his neck slit regardless of the loss of a body's amount of blood, being shot twice in a gun fight, and falling through the ice.

Say what you want about Shia LaBeouf, but I find him more serious in roles like this compared to action blockbusters like Transformers. Jack Bondurant was the youngest of three brothers, who wanted to get out of the driver's seat and actually sell the product he's been driving around. With all their competition being knocked off by the new deputy, there was a high demand in the brothers' white lightning, unfortunately not wanting to share their profits feuds a war with the law.

Overall, this movie was great and I can recommend it as a rent but probably not much more than that.