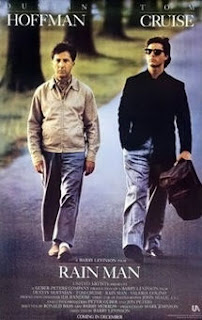 Selfish yuppie Charlie Babbitt's father left a fortune to his savant brother Raymond and a pittance to Charlie; they travel cross-country.


My Thoughts:
I've always put off watching this movie because of the mixed reviews I've read and heard about. Why there was so much hate on this movie is beyond me, but I thought it was written and directed great. Dustin Hoffman, playing the role of a middle-aged man with autism, Raymond "Rain Man" Babbit, who has been locked away from society since 1965. Come to find out he has excellent number skills but have no sense in money. Charlie Babbit, played by Tom Cruise, is a self-centered automobile trader in Los Angeles who ran away from his father's home in Cleveland Ohio when he was 16 years old after taking his father's car without permission and being jailed for two days after his father refused to bail him out.

One day, not unlike the rest, Charlie receives a phone call notifying him his father passed away. After the funeral, he sits down with his father's lawyer to go over his father's will, when he finds out all he inherits is a rose bed and the car he once 'stole'. The rest of the estate, approximately three million dollars is put in a trust fund for someone, who turns out to be his long lost brother-Raymond.

A visit to the institute where Raymond's been staying at for the past 20-some years, leads to Charlie kidnapping his brother for half of the inheritance. Come to find out Raymond is afraid of flying, so they decide to take a road trip back to L.A. Raymond has a routine that cannot be broken, so this delays Charlie's plans remarkably, but in the end it's for the best. The two brothers never had an opportunity to bond growing up.

This movie was emotional even to the average movie watcher, the bond formed between Raymond and Charlie was extraordinary. This movie is definitely deserved the best picture award it earned back in 1988, and definitely has a place in anyone's movie collection.

PS: Personally I don't think it's necessary to own this film in high definition (unless you can find the BD for sub-$5 which I did). But beware if you buy the single-disc Blu-ray, the picture looked like a upconverted DVD and the audio was on par to say the least (I had to adjust the volume on my TV 4 times throughout the movie due to alternating quiet/loud scenes). It also didn't have any special features or a main menu, if that bothers you seek out the deluxe DVD edition.
Posted by: Mike
Tags: 1980s, Drama, reviews