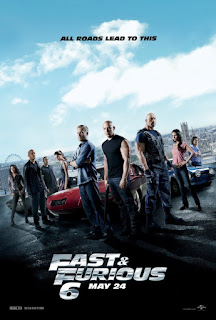 Synopsis, provided by IMDb.com:
Hobbs has Dom and Brian reassemble their crew in order to take down a mastermind who commands an organization of mercenary drivers across 12 countries. Payment? Full pardons for them all.

Spoilers ahead, continue reading only if you've seen the movie!
As a fan of the Fast and the Furious franchise, this review may come across as biased. I enjoyed the movies back when they were all about cars and street racing, and now that they've incorporated them into action movies I enjoy them just as much. Sure, this movie had it's flaws but what movie doesn't?

Fast & Furious 6 brings the original gang from Fast Five to the United Kingdom where FBI Agent Hobbs (Dwayne "The Rock" Johnson) hires them to follow and take down a organization of lethally skilled mercenary drivers in exchange for full pardons so everyone on the team can return to a whole family again. One problem, the mastermind of the organization, Shaw(Luke Evans) is aided by the love of Dom, Letty (Michelle Rodriguez), who was believed to have been killed in L.A. while being undercover to take down a Mexican cartel to free Dom (Vin Diesel) in Fast & Furious. Come to find out, she wasn't dead only to have no memory of her past, which makes for an interesting reaction for Dom.

Typical with the rest of the franchise, this one doesn't leave anything behind: Speed, hot cars, and a heist of government weapons. A great combination for an action movie. Very enjoyable popcorn flick that you mustn't miss.
Posted by: Mike
Tags: 2010s, Action, reviews