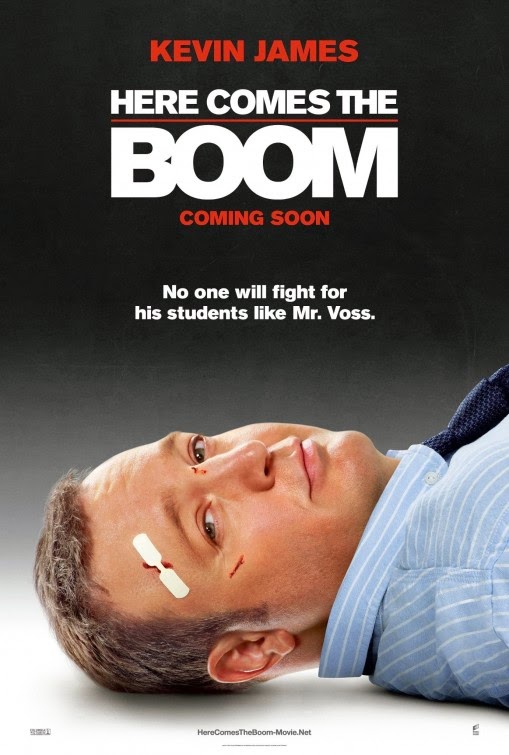 Synopsis:
Former collegiate wrestler Scott Voss (Kevin James) is a 42-year-old, apathetic high school teacher. When budget cutbacks threaten to cancel some of the school's programs and lay off its music teacher (Henry Winkler), Scott creates a scheme to raise money by moonlighting as a mixed martial arts fighter. Everyone thinks Scott is crazy-most of all the school nurse, Bella (Salma Hayek). In his quest, Scott gains something he never expected as he inspires his students and becomes a sensation that rallies the entire school.


Review:
Unfortunately this is an ongoing issue for schools across the nation. School programs are being cut due to financial reasons regardless of popularity and usefulness. Here Comes the Boom is about a determined biology teacher, Scott (Kevin James) who takes it upon himself to raise $48,000 to save the music department at the public high school he teaches at. Beginning with a second job teaching English to immigrants, he learns how fast he could raise the money if he becomes a martial arts fighter. After a series of fights, a roller coaster of wins and losses he becomes determined to fight to inspire his students - something he gave up years ago.


The big surprise here is that there was so much more involved than just another stupid comedy, a rarity for Happy Madison Productions. The story was your typical underdog story (Dodgeball, anyone?) with a hint of heart which keeps you rooting for Scott to the end. It delivered a fun, popcorn flick that can be endured by all. Kevin James was no longer the trying-too-hard-to-be-funny fat guy we all knew him as from his television debut on The King of Queens he had a purpose here.

The plot was very predictable, the stars could've been chosen differently- for instance Kevin James is the last actor I would ever imagine as a tough fighter. The last fight was unrealistic, as Scott is taking a beating the first couple rounds and bounces back and takes down his opponent in the third and last round, with one punch. Seriously? How did the producer of this movie not expect anyone to catch that?

Upon reading other reviews and forum discussions, I see many claiming Henry Winkler, who played the music instructor-Marty Streb-stole the show from Kevin James. I don't feel this is true, this movie was focused on Scott as he was the fighter though the story was based on Marty, as he was the one losing his job and tenure status. Winkler was a overzealous supporting actor for sure, but from my viewpoint, that only kept Kevin James from derailing the movie.

Consensus: It's a Happy Madison production that didn't involve fat jokes or Jewish jokes, a honorable underdog boxing story with a touch of comedy. Pop some 'corn and enjoy!