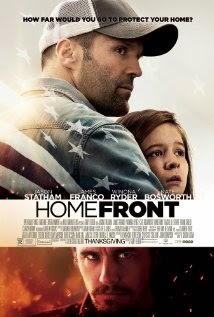 Synopsis:
Former drug enforcement agent Phil Broker is a family man who moves off the grid with his daughter to a seemingly quiet bayou backwater to escape his troubled past. However, Broker's world soon becomes anything but quiet once he discovers the town's drug-fueled, violent underbelly. Soon, a methamphetamine kingpin, Gator Bodine, puts Broker and his daughter in harm's way, forcing Broker back into action in order to save his family and the town.


Once upon a time, I wouldn't have given a movie like this a chance, but I liked The Transporter, The Expendables, and Death Race and the trailer which you can find below looked intriguing. I don't enjoy all of this guy's filmography, notably Crank and The Bank Job, this $1.50 rental was a gamble-fortunately a less expensive gamble than if I went to see it in theaters. Although I rented the Blu-ray, I didn't think the few action scenes or movie in general warranted it unless you're a high-def or bust viewer.

Jason Statham stars as Phil Broker, who's your typical outsider in a small town setting. Everyone around him seems to be related to one another, and everything that happens is big news. You'd think a town centered around a meth lab would be more secrete, but not this one. When Phil's daughter, Maddy (Izabela Vidovic) beats up the kingpin's bully nephew in self defense the bully's mother initiates threats towards Phil and Maddy and even gets her brother, the methamphetamine kingpin involved. The local police chief is worthless since the meth kingpin, Gator (James Franco) and his family pretty much run the entire town. Speaking of James Franco, he has the same questionable acting as he did in Pineapple Express (2008), and get this, he's pushing drugs once again. I can't think of a single movie he's starred in where he wasn't a drug dealer or kingpin, can you? After suspicious happenings at his secluded home and ignored police assistance, Phil decides to retaliate and go after Gator's business-the only problem: Gator decides to have Maddy kidnapped. A schoolyard fight turns deadly now as Phil will do anything to get his daughter back.Then at the end, like we've seen hundreds of times in the movies, the once afraid to do anything police chief decides to step in and do his job!

To conclude this review, I've got to admit my thoughts on Jason Statham has changed extremely over the years. I went from not caring for him as an actor, to liking him in a select few movies, to now thinking he may be the next 1980s Bruce Willis-you know, when he was bad ass. Homefront was definitely worth the $1.50 rental. Do I wish I had seen it in theaters? No, but I will more than likely pick it up when it reaches the bargain bins.