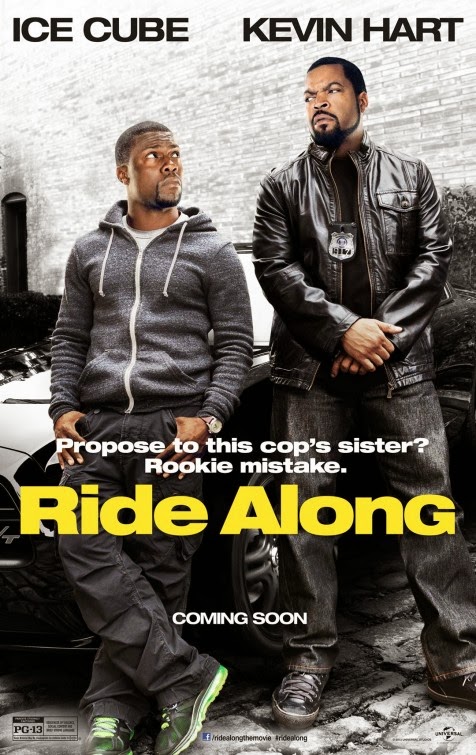 Synopsis:
For the past two years, high-school security guard Ben has been trying to show decorated APD detective James that he's more than just a video-game junkie who's unworthy of James' sister, Angela. When Ben finally gets accepted into the academy, he thinks he's earned the seasoned policeman's respect and asks for his blessing to marry Angela. Knowing that a ride-along will demonstrate if Ben has what it takes to take care of his sister, James invites him on a shift designed to scare the heck out of the trainee. But when the wild night leads them to the most notorious criminal in the city, James will find that his new partner's rapid-fire mouth is just as dangerous as the bullets speeding at it.

So, does anyone know whether this was supposed to be an action flick or a comedy? According to IMDb, a highly used resource, it's classified as both. A buddy cop movie starring comedian genius Kevin Hart, and the sub-par actor Ice Cube screams "check this out!" Since I first heard about this movie I was interested in seeing it...then the reviews started coming in, including this one over at Two Dollar Cinema. Against all odds, I had decided that I would just see for myself with the next free promo code I got from Redbox. After all, we all have different tastes in movies, right?

So late last night, I popped some popcorn and sat down for this ninety-some minute movie of cheesy laughs and horrible action scenes. Ice Cube played his same old "my shit don't stink" character alongside his sister's boyfriend and career video gamer played by Kevin Hart. Honestly, I never found Ice Cube to be funny or memorable in any way. That said, I was hoping Kevin Hart, who I've seen many times on Comedy Central, would save this movie from being a complete disaster.

A few things I "learned" from this film:
I can't believe there's a sequel in the works to be released in 2016. This movie was a flop and I guarantee a sequel will be even worse. As a comedy, this was fairly okay...a few chuckles here and there, but it's obvious Story tried too hard to make this an action movie that he neglected some of the jokes. I usually find something good about every movie I watch, but this one was a atrocious.

Overall this movie was worth what I paid, but it isn't even worth the $1.50 Redbox rental. As any follower of this blog should already know, Redbox sends out free rental codes routinely so there's no reason to pay to see shitty movies like this.

(Crap.If you must see this, rent it with a free rental promo code or borrow it from your public library.)