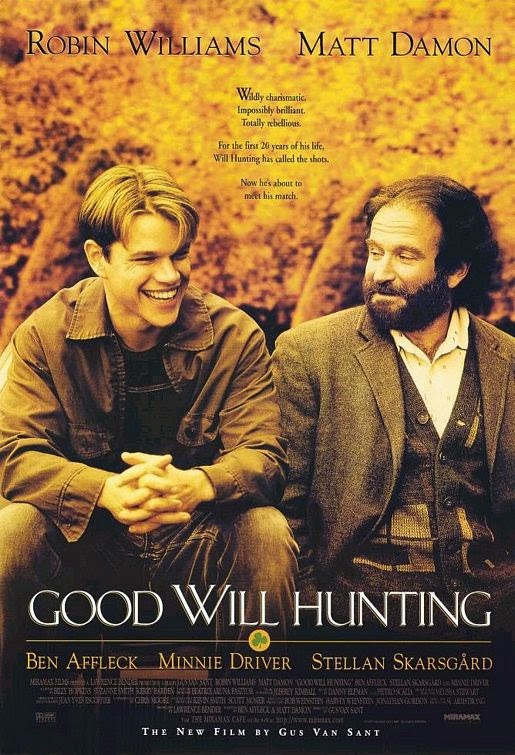 This is the story of a deeply troubled but extremely intelligent young man who works as a janitor at one of the prestigious technical schools in the world. Yup, meet Will Hunting (Matt Damon) an orphan living in south Boston and working as a part time janitor for MIT. One day, while he was mopping the floors he came across a equation on a chalkboard that to the surprise of the mathematics professor, Will solved before anyone else on campus.

Professor Gerald Lambeau (Stellan Skarsgård) sees how intelligent this kid is, and feels he should give him some direction. Using the help of many psychologists before resorting to a former college roommate Sean Maguire (Robin Williams), a psychologist with his own troubles.

The plot may seem repetitive and fairly predictable but the script was written just right to keep you entertained for the full two hours, never a dull lagging moment to be seen. The writers took a typical 21-year old's life and gave him a deeper inside story. Just because someone spends his free time hanging out with friends at bars and getting into fights, and has a rap sheet a mile long doesn't make them a bad person-does it? The performance by Matt Damon was extremely well done, he plays the emotionally damaged kid from a rough part of town, on the outside he looks like he's going nowhere in life but on the inside he's got what it takes to leave town and move anywhere he wants. Professor Lambeau saw this before anyone, Sean knew this but felt Will had to make his own life experiences. This is where I believe Robin Williams deserved the Oscar for best supporting actor. When he told off Lambeau, I swear I could hear every movie-goer applaud in joy.

I've seen many movies starring Robin Williams, mostly comedy pieces though, this being one of his few serious roles I think he did a fabulous job. As I just said, it was a well-deserved Oscar earned. Matt Damon and Ben Affleck were best friends, and they made sure everyone knew it. I'm generally not a fan of Affleck, he seems to steal the show more times than not, but the chemistry between the two of them were obviously portrayed greatly in this film. How much he cares for his friend's life, and not being afraid to tell him so was ingenious. Once Will met the gorgeous Skylar (Minnie Driver) it was apparent that even Will wanted more out of his life than working construction and mopping up floors. The bond formed between these two was believable.

Consensus: To some this movie was slow moving, but to me I thought it moved along at the right pace. The story is predictable but the performances given, especially by Robin Williams and Matt Damon were outstanding - well worth the five bucks I paid for it.