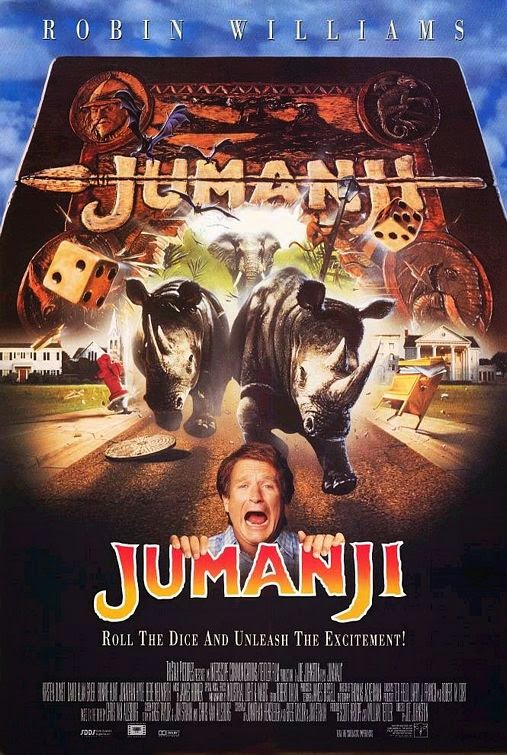 Summary:
Starting in 1969, young Alan Parrish and young Sarah Whittle discover a mysterious board game that reluctantly changes their lives. Upon his surprise, Alan finds himself transported into the dark side of the jungles of Jumanji! Twenty-six years later, he is freed by two unexpecting children. Alan (Robin Williams) reunites with Sarah (Bonnie Hunt) and together with Judy (Kirsten Dunst) and her brother Peter (Bradley Pierce) to outwit the game's powerful forces and return to the lives they once had. A combination of breathtaking special effects with a sleuth of magic and thrills bring you the game that must be played to believe!
I was only eight years old when this movie premiered and I thought it was perfect. It's probably among the few childhood classics I can think of, unfortunately over ten years have gone by since I last watched it so with the recent news of the loss of a great Hollywood comic (R-I-P!) I knew I had to revisit this one. It's story still holds up very well as the most entertained I've ever watched, out of the thousands of movies I've seen in my lifetime.

Once the movie begins much like you were playing the game personally you are hooked through to when a player reaches the end and calls out it's name. Some may say this is a children's adventure movie but it's much more, it's got everything: comedy, action, adventure, a time travel science fiction feeling, and even a love story all in one and is definitely not just targeted for children. Not that I'm saying it's not recommended, I only firmly believe children and adults a like will love this movie. It's story of two orphaned kids from the mid-90s playing a game with two kids from the late-60s portrays just how there were two universes set up, and that with every roll of the dice their lives changed each time.


The end of the movie marks the end of the virtual universe if you will, it was inevitable that Alan and Sarah would return to 1969 - twenty-some years before their teammates were even born. Flash forward a few years, we see Alan taking over his father's shoe business, alongside Sarah who we see is now an expectant mother, at a Christmas party they meet with the advertising agent who happens to be Judy and Peter's father who wasn't set to start his job until after a ski trip in the mountains that would inevitably turn Judy and Peter into orphans. Alan and Sarah rewrote their future by insisting they start sooner rather than later.

Consensus: This movie is a great 100 minute adventure ride for everyone of all ages!