Take a Walk in Someone Else's Shoes 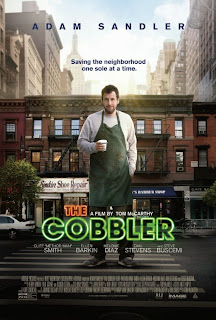 I used to be a big fan of Adam Sandler. In the last decade, we've seen a lot of crap that was somehow affiliated with him, so naturally I was a little nervous when my ten year old asked if we could rent The Cobbler.

Having known absolutely nothing about this movie, hell I wasn't even aware of it's existence until we saw it on the screen at the crimsoned rental kiosk. Despite all odds against this movie, I had a free credit burning a hole in my virtual wallet to use, so what did I have to lose, other than ninety minutes of my life? The Cobbler was significantly a better film than I had expected, it delivers a magical concept that actually works. While it still has it's flaws, like a few dumb jokes and a couple predictable plot events, it remains entertaining without juvenile humor attempts.


Max Simkin (Adam Sandler) repairs shoes in the same New York shop as four generations before him. Just when he finds his life not exciting enough, he finds a antique stitching machine in the basement of the shop that miraculously does more than stitch soles. It allows him to step into the lives of whoever owns the shoes, to include lives of those whose lives are more diverse than his. Adam Sandler has less of a juvenile attitude in this, and more of casual awkwardness from a polite man. Not to mention having a decent supporting cast to include Steve Buscemi, Ellen Barkin, and Dustin Hoffman gave this movie a different approach than what we are used to.

The plot reminded me of Be Kind, Rewind , in that the community is out to rescue an old neighborhood fixture - in this case the whole neighborhood - from being re-developed, using any means necessary. Overall, it's a film I can rightfully recommend.