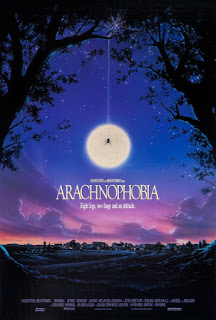 
The Movie:
Everyone is afraid of something...for Dr. Ross Jennings (Jeff Daniels), his phobia is downright embarrassing. But when he moves his family to a small town, the one thing that bugs him most is now harming the townspeople at an alarming rate. For this unlikely hero, overcoming a childhood fear of spiders might just save the community, but it may already be too late!


Review:
I'm not scared of spiders, but I watched this with someone who is. Needless to say, she spent a good share of this film with her eyes closed.

When the Jennings family move out of the city to plant new roots in a small town, where Ross is sure to fill a void as the town doctor, little do they realize it's not going to be an easy transition. For starters, the current town doctor decides not to retire as expected (a dick move if I ever saw one), he finds his place in said town won't be an easy grasp as he thought-after all, a small town only needs one doctor?

Things start to unravel when a deadly spider from South America stows away in the coffin of a dead photographer and winds up in the U.S. Ironically, each victim of the spider just happened to visit the new doctor recently, so the old doctor uses that to start a vendetta against Jennings; until Dr Jennings' uncovers the eight-legged beast with assistance from the town exterminator, played by John Goodman.

For so long I have somehow overlooked this Spielberg production. I always considered it to be some kind of spin off of Hitchcock's "The Birds." Spielberg took a well known phobia, combined it with some clean humor and a family-esque adventure and created a well made film.