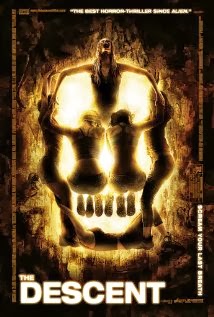 
The Movie:
Soon after an accident that takes the life of her husband and daughter, Sarah (Shauna Macdonald) starts visualizing things that aren't really there and her friends suggest going on a spelunking trip. After sudden change in plans, to discover a new cave, they wind up being trapped under ground. They have an limited amount of supplies, and they meet strange, blood thirsty cannibals as they try to find the way out.

Review:
This movie is highly rated on popular movie websites, but I didn't feel the love for this movie like a lot of the other reviewers. Regardless it was very well done. Many dark scenes to show they were below ground while in other movies that take place in a cave can be too brightly lit showing obvious nonfiction. This one also had the claustrophobic feel to it as the girls were crawling through the tight tunnels, which brought the viewer into the film so-to-speak.

Beyond the positive side, this movie had a handful of flaws to it. For one, it was very predictable, even for someone who didn't bother to read the synopsis or know anything about this film. This movie had plenty of jump scenes but having things jump out at you isn't scary. A plus I found in this movie was the heroine fight scenes particularly between Juno (Natalie Mendoza) and the creatures, although they were generally more gore than scary which isn't the point of a horror movie. Speaking of the creatures, those are some of the awful costume designs I've seen come out of Hollywood in years, as a casual movie watcher it almost leaves me unsettled on the future of cinema, as if they weren't even trying.

Overall, it's safe for a simple popcorn flick or if you plan to watch it with someone who's easily scared but if you're looking for anything serious, look elsewhere.