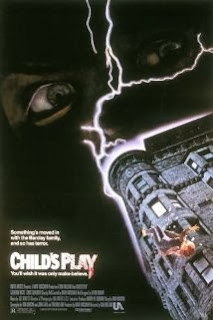 
The Movie:
For Andy Barclay (Alex Vincent) the only thing he wanted for his 8th birthday is a Good Guys doll. To much of everyone's surprise, the doll is possessed with the soul of a serial killer. One of the doll's many phrases is "we're be friends until the end" which for most, is only a matter of words but for Chucky it's a promise.

My Review:
There's nothing better than some good 80s horror this time of the year.  Popularity of this movie has been shown throughout the years with the many sequels that spawned from it, but nothing will ever be as good as this one.

When the the "Lakeshore Strangler" gets shot by police detective Mike Norris, Charles Lee Ray aka "Chucky" hides out in a toy store after his accomplice escapes without him, he vows to get revenge against his said accomplice and the police detective in his afterlife. Believing in voodoo, he transfers his soul to a Good Guys doll before burning down the store. A couple weeks later, little boy Andy (Alex Vincent) is turning eight years old and has his hopes up for a Good Guys doll. Unfortunately, his mother (Catherine Hicks) can't afford to pay the retail price for the doll but thanks to a friend and co-worker, she manages to get one from a street peddler in a back alley. Come to find out, this doll was found at a old burned out toy store... That's where the story begins, and we see Andy and "Chucky" start an adventure together - friends to the end. Andy is quickly manipulated into skipping school and going downtown to hunt down Eddie Caputo (Neil Giuntoli), Chucky's former accomplice and visiting the voodoo "Dr Death" (Raymond Oliver) to find out exactly how to get out of the doll's body before he's trapped forever.

It's a movie that's not made to act serious, just a voodoo story to entertain and terrorize it's audience. A job it's done very well for decades. It's scary, but the gore factor is slim to none and does not include any cheap scares that you can find in more recent horror franchises.

Favorite quote: "Hi, I'm Chucky and I'll be your friend 'til the end!"