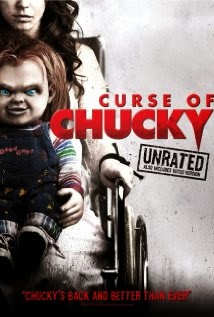 
The Movie:
Twenty-five years later, the infamous killer doll returns to seek revenge as well as to terrorize new victims. This story begins when the wheelchair-bound Nica (Fiona Dourif) accepts a package in the mail. Inside the package is a friend 'til the end.

Review:
This straight-to-DVD sequel is unlike the former two, it's actually pretty decent. The producers decide to bring back Chucky, and even release a little sinister history to keep the franchise fresh.

It all began twenty-five years ago, leading to the death of the "Lakeshore Strangler" and the reborn of Chucky. The "lakeshore strangler" falls in love with the then pregnant Sarah (Chantal Quesnelle). After the sudden death of her husband, Sarah goes into a depressed state, and insists on not seeing Chucky anymore. Now Sarah is still depressed and living with her wheelchair bound daughter Nica (Fiona Dourif) in a large, isolated house, when a package addressed to Sarah gets delivered. Inside the package, a Good Guys doll introduces himself as "Chucky". The event that night concluded in Sarah's untimely death. Nica's sister Barbara (Danielle Bisutti), her husband Ian ( Brennan Elliott ), their daughter Alice ( Summer H. Howell ), and their live-in nanny Jill (Maitland McConnell) all come to the house for their mother's funeral. When more people start showing up dead, Nica begins to realize the Good Guys doll isn't so good.

When I first went into this movie, I had the thought that it was going to be a total reboot of Child's Play which would've been disappointing. I'm glad to discover it was a sequel, and after all these years I think it was a job well done. Many scenes are effective with inbuilt tension and jump scares, notably the shower encounter and dinner gathering. With lingering camera movements and interesting angles, Mancini also leaves plenty to the imagination as some of the set ups take place off screen, that said there are lots of effects, blood and gore on display - decapitation, an electrocution, an empty eyeball socket and an axe attack to name a few.

I noticed they made the voice of Chucky more sparse this time around, I was expecting the foul mouthed one liners he was given in the Child's Play trilogy. That doesn't neglect my current feelings for this movie though, it was still superb acting and under great direction. The story leaves plenty of holes to be filled in with yet another sequel, which I will anxiously await. I definitely recommend this movie. And when you watch it, don't stop it as soon as the credits start rolling - stick around for the additional scene afterward.

Speaking of the after credits scene, my confusion was with the footage of Tiffany (Jennifer Tilly). She was killed, in the Bride of Chucky if I'm not mistaken, in the bathtub, shortly after transferring her soul into the Tiffany doll. So how could she still be alive at the end of this one? If anyone could clarify this bit for me, I'd appreciate it, drop a line in the comments.