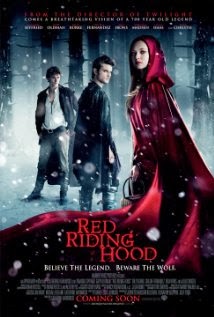 
The Movie:
Set in a medieval village, the young beautiful Valarie (Amanda Seyfried) falls in love with a woodcutter, Peter (Shiloh Fernandez) all while her parents have already arranged for her to marry the wealthy Henry (Max Irons). Not wanting to be apart any longer, Valerie and Peter decide to run away until her sister ended up killed by a werewolf that haunts the town. For years prior, the town has sacrificed a animal whenever the wolf comes around. Until one red moon night, when the werewolf decides to take a human life. The town is now frantic and decides to call upon a famous werewolf hunter, Father Solomon (Gary Oldman), to help them kill the wolf. Soloman brings some bad news that warns the people that the wolf takes the form of a human by day, and can be any one of them. Valarie quickly suspects the werewolf to be someone she loves, but has she starts to panic the townspeople turn on her declaring she is a witch because she did something none of them have ever done: speaks to the wolf.

Review:
Twilight director, Catherine Hartwicke brings us a folk tale adaptation. The idea was good, but the way it was portrayed was horrible. There's something about movies like this that make me cringe for thinking there's no value in film anymore, a story that's supposed to be about a little girl walking through the forest to grandma's house only to find a big bad wolf has taken her place has been transformed into another love triangle. I couldn't help but think to my self whether I have  already seen this movie, even though I know it was the first viewing. It became obvious to me that this movie was put out to attract Twilight fans with this plot.

Casting Amanda Seyfried as "Red" (err, Valerie?) was an interesting choice, considering the last movie I remember seeing her in was Jennifer's Body where fortunately her good looks distracted us from her bad acting ability. And why Valerie? What was so wrong with keeping the original fairy tale alive and naming her Red?  Overall, Seyfried was the right choice. To be fair, given the cheesy dialogue and Hardwicke's uninspired direction you couldn't expect anyone else to do a better job.

This movie had it's fair share of bad CGI, especially the werewolf scenes. For a PG-13 rated film, you can't expect any hardcore action or gore and Red Riding Hood was no exception.

Bottom line, Red Riding Hood is a campy popcorn flick and is worth a dollar rental if you are hard pressed for something to watch.