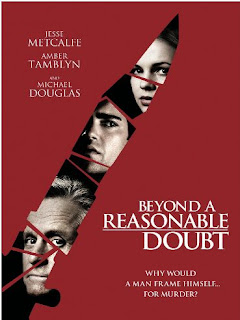 
The Movie:
A District Attorney, Mark Hunter (Michael Douglas), who tampers with evidence to secure his convictions, decides to run for governor. But when an ambitious journalist, C.J. Nicholas (Jesse Metcalfe) begins to investigate him. Commencing a risky game of cat and mouse with Hunter, C.J. frames himself as a murder suspect to catch the corrupt D.A. in the act.

Review:
This movie has many problems, starting with the idea of someone practically murdering someone, turning himself in, and getting acquitted of all charges. A big blooper would have to be at the beginning when the police report showed the murderer was bitten by a small dog and yet C.J. didn't have any bites except the one from the small dog he adopted to bite him, to reenact the crime. Did he get bit when he first killed the woman, or was that just a rumor?

The most bizarre scene was when C.J's  reporter friend Finley (Joel David Moore) was running around for the DVD that had the proof that C.J. was innocent. First, there was no need for all the running around. C.J. could have just handed his attorney an envelope that says not to open it until the trial. Second, what would that DVD prove anyways? Hunter already pointed out he could've bought a second pair of pants and shoes after the crime was committed. It was obvious at this point, C.J. wasn't going to be charged with the murder due to improper evidence to hold him, as long as Hunter was finally caught for tampering with evidence.

As for Finley's death, it should never have happened... If he didn't panic at the intersection, he would've had time to pull out before that bus passed. Also you can't say no one on that bus (driver, passengers) or anyone between the bank and the scene of the accident saw anything -- that would've been enough to lock up that detective for manslaughter.

Also, the detective trying to kill Ella (a district attorney who works with Hunter and is in a relationship with C.J.) with his car, when she was snooping around to prove his 'innoncence'. I realize he wanted to scare her before killing her but all he had to do was pull out his gun, shoot her and drive off, I'm sure one gun shot would be quieter than the tires squealing.

So, the end of the movie... Ella managed to prove C.J's innocence but realized she made a mistake when taking another look at the coverage of the young, pregnant prostitute from Buffalo NY that C.J. used and claimed was deceased was the woman killed. Putting two and two together, she did what she had to do...

Bottom line, the movie was had more than it's share of flaws and confusing moments, but in the end you have to realize it's just a movie! For a mystery to make one think and debate, it was definitely successful but as a movie it still needs some work.