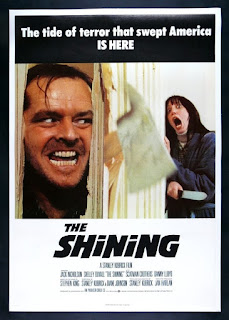 
The Movie:
When school teacher Jack Torrance (Jack Nicholson) decides he wants to write a novel and quit teaching, he takes a job as a live-in winter caretaker of a isolated hotel in the Rocky Mountains. Soon upon arrival his son, Danny (Danny Lloyd) starts seeing disturbing visions of the hotel's past. While burying himself in his writing, Jack also falls into a deep form of insanity caused by cabin fever and sightings of the hotel's ghosts. After being convinced by the waiter's ghost that he needs to "fix" his family, the only thing that can save Danny and his mother, is "the shining."

Review:
This film adaptation of Stephen King's novel has seriously scared the crap out of me since the first time I watched it. The story was written well and the movie is not a disappointment. Stanley Kubrick is a recognizable name in film history for a few gems such as "Full Metal Jacket," "A Clockwork Orange," and "2001: A Space Odyssey". The Shining isn't any different, his work has always had a sense of seriousness with the long lengths.

"What Is The Shining?" It's a telepathic sixth sense that Danny Torrance (Danny Lloyd) in the movie had, which allowed him to see and hear from ghosts from the hotel's past. It's this gift that perhaps saved him and his mother when his father Jack is convinced he must fix his wife and child from taking over, during his mental breakdown resulting from cabin fever. Being stuck indoors all winter will do this to someone, it's not too surprising in life. It's been proven that many people in the world experience similar symptoms, wanting to bring harm to themselves or someone else.