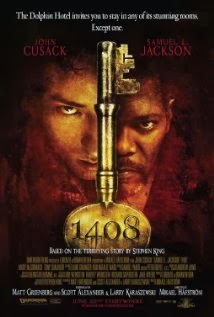 
The Movie:
A paranormal investigator and author, Mike Enslin (John Cusack) decides to add one last chapter to his latest book by checking into the evil room 1408, at the Dolphin Hotel in New York, against the warning by hotel manager Gerald Olin (Samuel L. Jackson). Soon after arriving, he finds out first hand that the evil happenings in that room isn't as fabled as he imagined. He checked into the room, but he now won't be able to check out.

Review:
This one may take a couple viewings to understand it, but as you understand it fully you should come to realize how much of a gem it is for it's time. The story doesn't waste any time to jump right into things. Mike Enslin writes a suspenseful series on haunted hotels, usually uncovering the mystery. Until this one evil room at the Dolphin Hotel that has taken over fifty lives prior to his stay. The first thing that comes to mind is how can a room be evil? My take on this would be the room forces the guests to dig up unfortunate events from their past, as such that happened to Mike Enslin. Mike lost his young daughter to a incurable disease, which forced him to give up hope for the future. He buried himself in his work for years following her death, separated from his wife, and pretty much gave up living. The room reminded him of the good times he had with her, as well as the last few moments they had together. All this stress piled on all at once caused him to go into a mental breakdown, resulting in thinking he was trapped. He had to clear his mind and kill hte evil spirits around to get out.