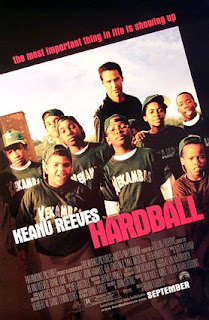 
The Movie:
Conor O'Neill (Reeves) is a down-on-his-luck gambler in debt to dangerous loan sharks. Desperate for cash, Conor reluctantly takes a job coaching a youth baseball team. The "team" turns out to be a ragtag group of tough-talking kids from Chicago's inner city. Secretly, Conor plans to desert the team after he wins a big bet. But the stakes are higher than Conor imagined: The kids need someone to believe in. As Conor wrestles with his past, the kids start to teach him some lessons that will forever change his future -- that responsibility and trust must be earned and hope can appear in the most unlikely places.

Review:
It's unfortunate a movie with a little emotion would get so much negative criticism. After watching this movie I was extremely delighted with the entire experience. Anyone who ever doubted Keanu's acting abilities should only watch this movie, especially the eulogy scene to see that critics have been wrong. Strong, emotional, sympathetic, and completely believable. I originally believed this was going to be another story about a typical loser who takes over a group of unfortunates only to find a purpose for themselves, and I expected this to be only mildly entertaining. However I was wrong, this film truly moved me. I'm a middle aged male who doesn't care for too many sappy, emotional films, but I loved every second of this one. I'm especially glad the producers decided not to make it a last minute, win at the last possible second.

With the symbolism between one man's gambling addiction and the street gangs, we learn just how much "showing up" (taken from the film's official tagline) was the best way to overcome our problems, be it in life or on the field. This story is suitable for audiences of all ages, despite some choice words used. Honestly, I would not hesitate to allow my now eleven year old daughter watch this movie and talk about it. Recommended for everyone, sports fans or not.