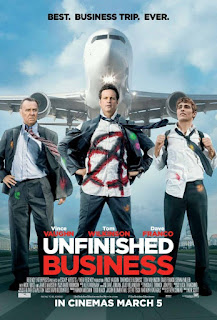 
The Movie:
Upon feeling unappreciated at a big corporation, a hardworking salesman decides to break off and form his own business. After a slow year on the business front, he and his two associates travel to Europe to close the most important deal of their lives. What began as a routine trip, ends up being a battle against finding out what is truly important.

Review:
After watching this, I decided to double take what appropriate rating this deserved.  I opted to go with a solid 7 out of 10, why? Well, despite it's attempt at humor weren't much more than crude sexual jokes, I did find myself laughing throughout this movie. It's not Academy Award quality, but come on, ask yourself when the last time Vince Vaughn or Dave Franco was in a Oscar winning film...right, never.

Bullying seems to be a hot topic these days, not just in schools but in life. It is because of this that the writers intuitively included a back story involving an bullying issue with Vaughn's two kids, in an attempt to grab some emotion from the viewer. Not only the kids, but we saw how bullying is involved in the real world as well. Dan Trunkman and his two colleagues were counting on this important deal to keep their business, the company they were meeting with knew this and in the words of Tom Wilkinson, used them as to fluffers. They knew they were going to hire the bigger and more experienced company way before meeting with Trunkman's company, but insisted on wanting them to travel half way across the world anyway.

Upon first arriving in Europe, the three unlikely businessmen find themselves already off to a bad start, there were no hotel vacancies. Good news for Franco, there was a youth hostel with a vacancy and although Wilkinson may be youthful at heart, but let's face it he hasn't been a youth in many decades, but the owner of the hostel showed him some pity and allowed him to stay in the hostel's business center. Trunkman lucked out and scored a suite at a museum, or did he? Little did he realize that suite was actually an exhibit, an American Businessman exhibit, so he was being watched by the public all day long. To make matters worse, he had a routine running schedule and allowed his daughter to pack his running clothes...which she did, by the way, his wife's workout clothes. Still a routine is a routine, he put on the jogging bra and short shorts and hit the road.

Once realizing they were what they were afraid of, they could've left Europe and moved on with their lives, but they didn't. They had unfinished business to attend to, and although Trunkman had possibly a bigger problem at home they stuck around to get what they traveled thousands of miles for.