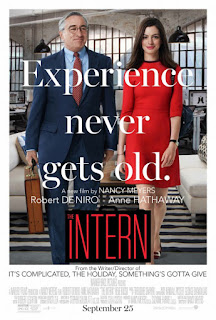 
The Movie:
Ben Whittaker is a 70-year-old widower who has discovered that retirement isn't all it's cracked up to be. Seizing an opportunity to get back in the game, he becomes a senior intern at an online fashion site, founded and run by Jules Ostin.

Review:
I have often asked myself, what will I do when I retire? After working all my life, I wouldn't be able to just sit around and do absolutely nothing and let's face it sitting in a senior citizen center playing bingo and eating pudding doesn't sound all that exciting. Unfortunately once you hit that certain age, employers no longer have an interest in you so finding a new job outside of a meaningless retail position will be extremely difficult.

If The Intern taught us anything, it's that Robert De Niro isn't far from living that lifestyle himself. Face it, he's old, he may have many years of successful acting experience under his belt as well as a few prestigious awards but even Hollywood is interested in finding new talent. Speaking of which, Anne Hathaway may have hit her peak in this film. I can't say I've seen anything else she's done that is so remarkably memorable.

We've pretty much seen this before with Owen Wilson and Vince Vaughn in The Internship. When are filmmakers going to learn that jokes involving technology and older folks simply isn't funny? Oh, Ben's so old that he can't figure out how to turn on a laptop, we must milk that for everything it's worth.... However when young entrepreneur hot shot Jules (Anne Hathaway) finds herself too wrapped up in her business to spend time with her family, and is suggested to sell out to a big CEO, it's Ben who has to remind her what's truly important in life.

Experience is a good thing, but my advice? Do more than one thing, not just the same thing for 40+ years. Seriously, how many millennials even know what a phone book is? Thanks Google.