Time is the Ultimate Currency 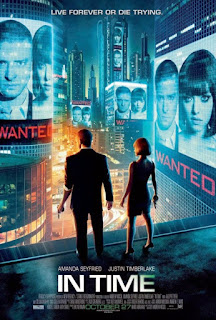 Imagine a world where you stop aging at twenty-five, then you're genetically engineered to only live one more year-unless you can buy your way out of it. The rich "earn" decades at a time, becoming essentially immortal while the rest struggle to work or otherwise beg, borrow or steal enough hours to make it through the day.

That is the cycle of life for the people of this futuristic science fiction, In Time (2011), people like Will Salas played by Justin Timberlake. Will is a "time-watcher" of the ghetto who is just like everyone else wants to buy their way into an immortal youth. When his mother, played by the gorgeous Olivia Wilde dies, he meets a man who escapes the uptown life and gives Will his remaining time with one caveat, he must do something productive with it.

First he gives a couple dozen years to his best friend, Borel (Johnny Galecki) who we later learn spends it all on booze and as a result dies. The rest of the movie is your basic Robin Hood story, he travels through the toll gates out of the ghetto to the uptown neighborhoods. This is something that has never been done before, for obvious reasons. When Will is accused of murder by the timekeeper (Cillian Murphy) he is forced to take the banker's daughter Sylvia Weiss (Amanda Seyfried) hostage.

Living minute to minute, the two team up to be a powerful tool against the system. Sylvia decides the best way to get back at her father for sheltering her for all these years is to rob him blindly one 'bank' at a time. Keeping enough time to keep themselves alive, and giving the rest away to others struggling. An ordinary Robin Hood story, stealing from the rich to give to the poor.

The concept of this movie was excellent, but the way it was executed was terrible. For starters, let's take our main character, Justin Timberlake who quite frankly we find out cannot pull off a "tough guy" act, the idea of giving him the girl in the end is pretty believable although choosing a talented actress such as Amanda Seyfried may have had a little something to do with that. Next, the irony of our "timekeeper" dying because he stop keeping track of his own time? That was not only expected but silly to write into the script, as he was killed off without even trying.

Other than those two disappointments, this movie was excellent. The run time was perfect, I didn't think it was. One other thing that impressed me about this movie was just how much it was right on with the analogy of how it truly is in some parts of the world where the rich have everything while the poor are neglected and struggling to make ends meet.

Overall, if you find yourself looking for a science fiction thinker, don't look any further than this title. If you are looking for something a bit more adventurous, you can do a lot better than this.