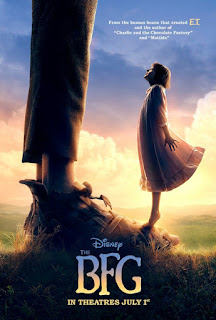 Little orphan Sophie (Ruby Barnhill) is an insomniac, never having the opportunity to dream and as an orphan always looking for an adventure. One night unlike the rest, she was up roaming around the orphanage, staring out the window when she spots something unusual, the Big Friendly Giant (Mark Rylance). While initially she's scared of the Giant, she quickly learns there's more to him than just being monstrous and talking funny; he's actually quite sweet and just wants her to feel comfortable being around him. After all, the Big Friendly Giant feels as if he can’t let her go back to the real world, where she’ll most definitely be going on and on about the Giant, making everyone suspicious and worried about its actual whereabouts. For a short while, Sophie and the BFG seem to get along just fine, that is until word gets out in Giant country and his fellow, meaner giants like Bloodbottler, Fleshlumpeater and others, start sniffing around for something new to eat, giving Sophie and the BFG a challenge on how to stop these meaner giants once and for all.

This feature was brought to us by, in the humble opinion of this editor, the best filmmaker ever-Steven Spielberg. Spielberg's at the point of his career where he really doesn't have to try to please anyone, he's pretty much done a bit of anything and everything. He's done it all, and for now it seems Spielberg is oging to do what he wants, when he wants to, and how he wants to do it. With Disney picking up the tab, it should be an interesting result, right?

Well, yes it does, interesting being the key word. After watching The BFG, I'm reminded just what Spielberg is capable of doing: Taking any story, no matter how weird or realistic, compelling to watch.

The first act of The BFG is rather exciting because it's different then what we're used to seeing from a kid-approved Disney movie, where rather than concentrate on the visual effects and the like, Spielberg decides to take it slow so that we can connect with the chemistry between our characters a bit. It all works out too, because Rylance and Barnhill are both perfect for their respective roles.

Of course, the BFG isn't a perfect movie, as we can expect from the latter of Spielberg's work. He spends more time getting us to connect with the characters that I feel he neglects the actual story line, until, well it's too late. With a running length of just under two hours, it's a bit long for a children's movie but as I've said in the past, most any movie is worth sticking out to the end regardless (just good luck convincing that to a kid, who would have likely gave up on this one after the first 30 minutes).


RATING: 7/10; It's a good movie, although leaves a lot to be granted in the story department. A kid, whom I would think would look forward to this movie the most, would likely not make it past the thirty minute mark.