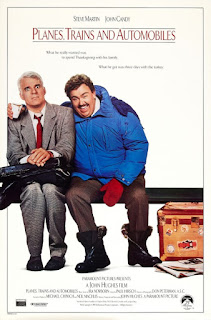 
So here we are, Thanksgiving Day in America, and what better way to celebrate than with a traditional viewing of one of John Hughes' best! Planes, Trains & Automobiles is about a man, Neil Page (Steve Martin) who is trying to make it to his suburbia home in Chicago. Along the way he meets this obnoxious salesman, Dell Griffith played by none other than the comic genius John Candy.

You never know what the holidays may bring, for Neil all he wanted to do was make it home for Thanksgiving dinner. Dell, however had no body to spend the holidays with, after losing his late wife and taking to the road.

For many years I avoided this film because I thought it was going to be just another road trip flick. I was pleasantly surprised, yes they're on a road trip, but also includes so much dramatic, emotional and truthful subtext. This has since turned into one of my favorite holiday comedies.