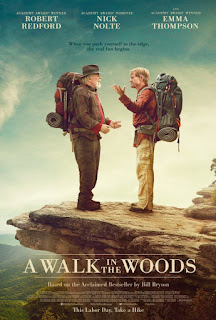 
A couple old guys taking a walk on the Appalachian Trail doesn't sound like an award winning motion picture does it? Well, as it turns out, it isn't. The success of similar features usually relies on the chemistry of the two leads, something we notice is a bit lackluster here.

Bryson (Robert Redford), a renowned author, is facing a delayed mid-life crisis and on a whim decides to walk 2100+ miles on the east coast, from Georgia to Maine, via the Appalachian Trail. The problem is: his wife, Catherine (Emma Thompson), won't let him hike it alone. After being rejected by most of his old friends, he is forced to invite the only one with an interest - a man he hasn't seen in decades and with whom he didn't part on the best of terms. By his own admission, Katz hasn't done much with his life and is so out of shape, it looks like he might have trouble walking a mile, let alone 2100+ of them. Nonetheless, the two of them hop on a plane to Georgia and the odyssey begins.


RATING: 4/5
Overall: A Walk in the Woods is a very mediocre adventure flick, if you want a similar film but with better background story my recommendation would be to see Wild.