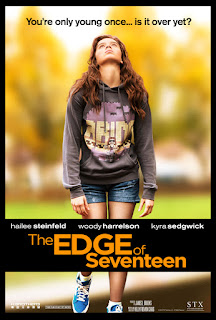 High school can be the best or the worst time of your life. For many, it's a wonder how anyone survives this awkward time. For Nadine (Hailee Steinfeld), she's earned the label. Over the course of the movie, which tracks during her junior year, she learns that the path of survival has less to do with doing homework, losing her virginity, or making friends than it does with becoming comfortable with herself.

Nadine is conflicted with one the most catastrophic ailments any nerd-leaning child can have: a popular sibling. Her brother, Darian (Blake Jenner) is beloved by the entire student body, but worse is he's always had more love and support from their mother, while Hailee's always been the black sheep of the family. Despite feeling isolated since the death of her father, Nadine has found solace in the friendship of Krista (Haley Lu Richardson), the sister-figure she never had. Krista isn’t just her best friend, however, she’s her only friend.

This isn’t a romance (although there are romantic aspects); it’s a coming-of-age drama. Hailee Steinfeld portrays Nadine as an awkward student, supported by a best friend-turned-brother's-girlfriend, a absent-minded mother, a loving but recently departed father, and Woody Harrelson: a teacher we all wished we had in high school. The screenplay presents life through Nadine's perspective and, as circumstances force her to grow and change, we see things more clearly: betrayals that aren’t really betrayals, “perfect” lives that aren’t quite so perfect, and people hurt by her actions who don’t deserve the pain.