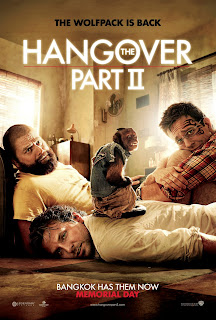 For those of you living under a rock, a second Hangover movie hit the box office in late May. This time, Stu's getting married and the entire wolf pack: Phil, Stu, Doug, Alan, and Stu's future brother-in-law Teddy travel to Thailand. After the unforgettable bachelor party in Las Vegas, Stu insists they just have a safe, subdued pre-wedding brunch. However, something goes horribly wrong the night before the wedding in Bangkok.

What starts out as a nice quiet evening on the beach, drinking beers and roasting marshmallows ends with Phil, Stu, and Alan waking up in some rundown apartment in the city of Bangkok. Doug is back at the resort, but Teddy is missing, there's a monkey with a severed finger, Alan's head is shaved, Stu has a tattoo on his face, and they can't remember any of it. The wolf-pack retrace their steps through strip clubs, tattoo parlors and cocaine-dealing monkeys on the streets of Bangkok as they try and find Teddy before the wedding.

Personally, I thought the first Hangover movie was an instant classic, but this one tanked. Sure it had a couple humorous scenes, but definitely not as funny as the original!
Posted by: Mike
Tags: 2010s, Comedy, reviews