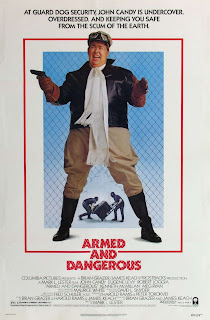 Frank Dooley (Candy) an ex-cop, who is thrown out of the force after being framed by corrupt colleagues. Norman Kane (Levy) is a useless defense lawyer. They team up in their new careers...as security guards. Their first job is to guard a warehouse, that ends up getting robbed. Of course, like everything else the two get falsely accused of allowing it happen. Dooley and Kane suspect something fishy among the robbery and the security firm's union. The two security guards decide to investigate the situation and figure out what's going on. Making enemies along the way, and confronting their boss's attractive daughter, who just started working for the security firm, they uncover the entire robbery as a team.
Posted by: Mike
Tags: 1980s, Action, reviews