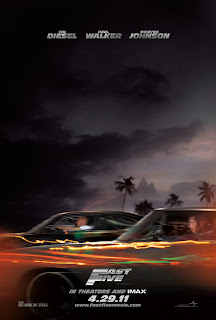 Former cop Brian O'Conner (Paul Walker) and ex-con Dominic Toretto (Vin Diesel) return once again as a team when they're on the run after breaking Dom out of custody. They've blown across many borders to elude authorities. Now backed into a corner in Rio de Janeiro, they must pull one last job in order to gain their freedom. As they assemble their elite team of top racers, the unlikely allies know their only shot of getting out for good means confronting the corrupt businessman who wants them dead. But he's not the only one on their tail. Hard-nosed federal agent Luke Hobbs (Dwayne Johnson) never misses his target.

Normally a sequel isn't a good thing, but in this case I think it was for the best. Fast Five picks up where they leave off on Fast & Furious, with the cast from all 4 previous fast and the furious movies because they're unsure who to trust in Rio de Janeiro, they have to put together a new crew to attempt to pull off a 100 million dollar heist.
Posted by: Mike
Tags: 2010s, Action, reviews