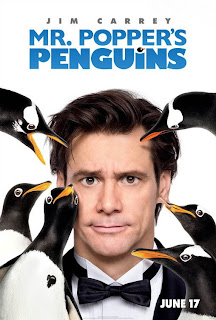 When Mr. Popper's (Jim Carrey) father passes away, he inherits six penguins. As he transforms his Manhattan apartment into a winter wonderland, his life unravels. He has to sell the "Tavern on the Green" property from an owner that doesn't want to sell the property to just anyone. To top it all off, he's a divorced father of a teenage daughter and a young son.

This untimely gift ends up being a tool to re-unite him with his children, and later his ex-wife. The kids instantly fell in love with them, even though their father didn't want the birds, he knows he has to keep them from the antagonist of the film, the zookeeper, who wants to sell them.
Posted by: Mike
Tags: 2010s, Comedy, reviews