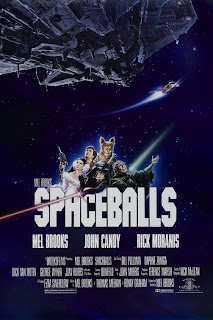 When princess Vespa of Druidia escapes from the set marriage to prince Valium, she gets kidnapped by the evil race of the Spaceballs. The Spaceballs ask king Roland for a tremendous ransom: the abundant supply of air of Druidia to replenish their own. In the meantime, a space rogue, Lone Starr and his friend "Barf" the half-man half dog, are in need of one million space bucks to re-pay a debt to "Pizza the hut." The King decides to offer them this amount, to persuade him to save Vespa.
Posted by: Mike
Tags: 1980s, Comedy, reviews