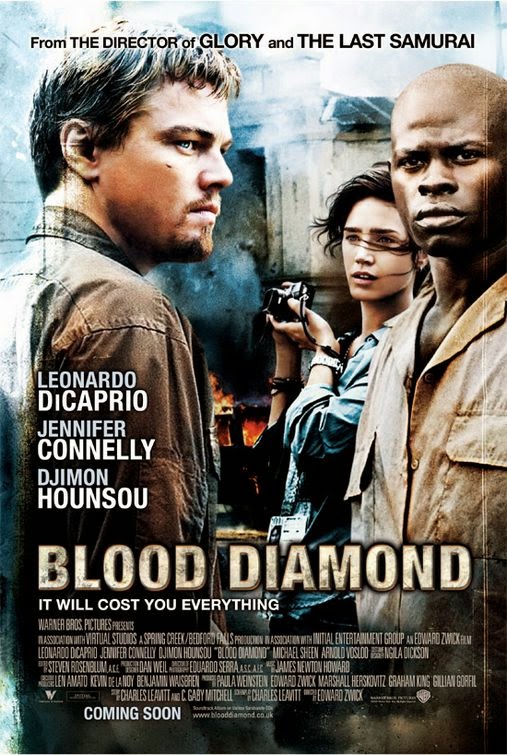 Married? Thinking about it? I'd be willing to bet you'll be shopping for or dreaming of a nice big diamond ring if you haven't already got one. Have you thought about where that shiny rock came from? Here's a hint, it didn't come from Jared. According to Blood Diamond, rebel forces invaded small villages in Sierra Leone to enslave able bodied men to dig and sift through the sands of the desert for flawless diamonds only to be sold or traded at no restitution to the slaves. This story is about a particular fisherman, Solomon who managed to escape a mining camp, with the assistance of former mercenary Danny and American overseas reporter Maddy.  Upon arriving at the refugee camps, Solomon learns his son Dia was taken by the rebel forces to be transformed into a child soldier. While Danny's only interested in the rare pink diamond that Solomon found and hid, the only thing Solomon wants is to rescue his son and get his family back.

Nominated for five academy awards including best supporting actor(Leonardo DiCaprio), leading actor(Djimon Hounsou), film editing, sound mixing, and sound editing. It's unfortunate that Blood Diamond didn't win any awards at the 2006 Oscars. Somehow this movie slipped under my radar, I just came across the DVD for this earlier this year and thought the synopsis sounded interesting, in the political sense.

The cast line up was what really sold me on this, let's start with Jennifer Connelly, her filmography for the past decade has been pretty active, not perfect but hey, let's face it her gorgeous body isn't hard on the eyes and I've been entertained by her past performances. Now we turn to Leonardo DiCaprio, what isn't there to like about him? His filmography is compiled of very successful movies, many big blockbusters. Moving onto Djimon Hounson, I'll be completely honest and say I had no idea who this guy was before I watched this movie, I didn't recognize him from The Island or Gladiator, both movies I've seen many a dozen times or better. His performance was better than DiCaprio's in this movie, I couldn't imagine playing the role of a slave, and I don't think many would want to. Zwick did a outstanding job at directing this movie, and it shouldn't go ignored, it's not his first time directing a civil war movie, if you've seen Glory - based in the USA during the 1800s - you'll want to see this one.

Overall, I'd say this movie is not for the faint of heart. Not because of the sight of blood or lack-thereof, but the general nature of violence portrayed in this film. The director didn't hold back on the violence, we see the rebels force themselves into the villages and slaughter women and children, enslaving males for the mining camps, and taking boys to transform into child soldiers. On the other hand, Zwick made this movie incredibly realistic so just turning on the evening news you could see just how factual this movie is. In some parts of the world, there's still a civil war..There's still child soldiers out there killing and being recruited into the rebel forces. Just give it a shot, what do you have to lose?

(** site notice: I'm trying out a few new formats for my reviews, so this one and the ones to come may look different than usual, but rest assured they are still written by me -no copying other than the synopsis off the back of the DVD case**)
at June 10, 2014
Email ThisBlogThis!Share to TwitterShare to FacebookShare to Pinterest
Labels: 2000s, Action, reviews