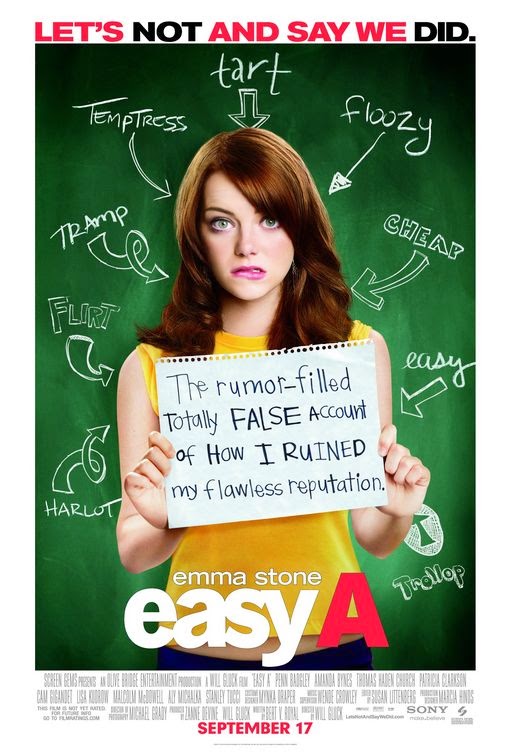 Synopsis:
In this charming, critically acclaimed tale of rumors and reputation, Olive (Emma Stone), an average high school student, sees her below-the-radar existence turn around overnight once she decides to use the school's gossip grapevine to advance er social standing. Now her classmates (Amanda Bynes, Aly Michalka) are turning against her and the school board is becoming concerned, including her favorite teacher (Thomas Haden Church) and the distracted guidance counselor (Lisa Kudrow). With the support of her hilariously idiosyncratic parents (Stanley Tucci, Patricia Clarkson) and a little help from a long time crush (Penn Badgley) Olive attempts to take on her notorious new identity and crush the rumor mill once and for all. 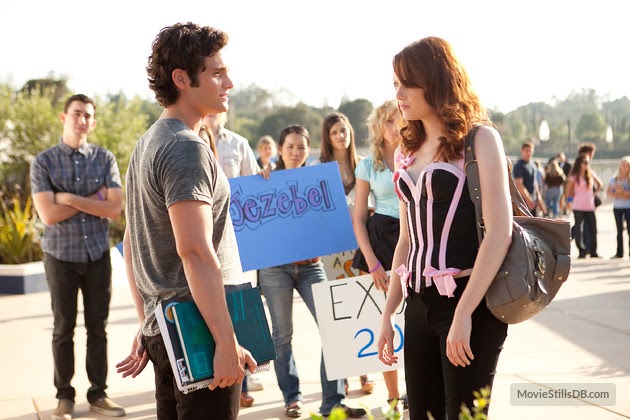 If you've read or seen The Scarlet Letter, than you will most likely know what this movie's all about. Olive Pendergast is an outcast in high school, an average student who, up to this point has only blended in. Until one day she makes up losing her virginity to her best friend when class president and religious nut Marianne (Amanda Bynes) overhears and spreads it around the school. Now she is known as the school slut, in a matter of defense she ends up in detention with a ridiculed homosexual student Brandon (Dan Byrd) whom she admits to that she made up the rumor. Now he thinks of a way he can get the bullies off his back by telling everyone he slept with Olive, with her permission of course, this follows a little overzealous staged "show" for all of her classmates at a party. That show, albeit artificial, begins the first of many ugly rumors pertaining to Olive's sexual and social status. Now any kid who was once bullied comes to her for permission on if they could tell everyone they hooked up even though they didn't. 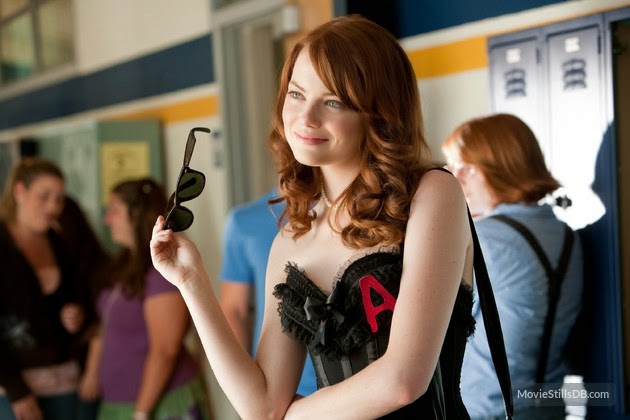 It was going well at first, she was helping her peers and scoring free gift cards to random stores in return. But it didn't take long for a certain high school clique to intervene and turn against her. This is tthe type of rumor she never asked for, walking around with a proverbial 'A' marked on her, 'A' for adultery. She's the fall-girl when the oldest living senior who was having an affair with the truly slutty guidance counselor comes down with chlamydia  She confesses to have made the entire thing up to her English teacher and announces that his wife is cheating on him with a student and used the rumors to save her job. In an effort to reverse the rumors, she decides to start a web show to release the lies. Explaining how she only wanted to help one ridiculed kid, with no intentions on alienating everyone and becoming the community whore. 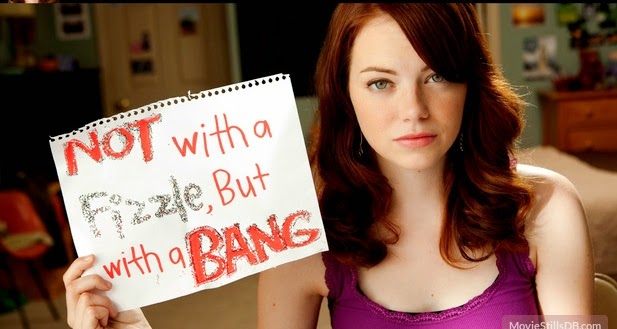 Chances are you've seen this movie, but if not, it's definitely worth checking out. Emma Stone's filmography has been growing over the last few years, although there are some duds most of her work is pretty decent for modern drama comedies It's not worth owning, as its not something I would see anyone watching over and over again, as it is just a mindless dram-com(drama+comedy) but it's perfect for a late date night flick as most of Emma's filmography is.